What a Writer Doesn't Write 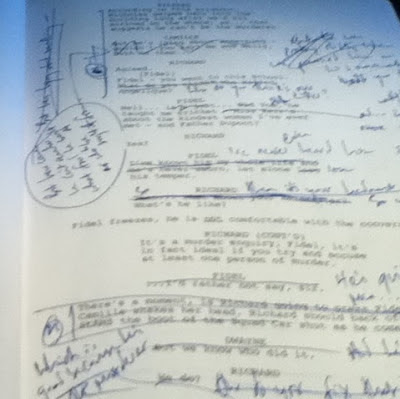 It’s a topic that can’t easily be summed up in one short post, there’s so much to discuss and debate (different styles of screenwriting, what someone does well another will do atrociously, a wannabe Shane Black for example) but style and tone aside, the important exposition about character, story and emotion is what I’m talking about, the stuff that’s not in the dialogue but in the characters’ visual behaviour and motives…
by Danny Stack at 10:22 am

You've put into words what has bugged me for ages. I think this has an extra resonance when you're writing comedy - you imagine how the actors say the words, whether the charcater is party to the irony, whether the listener is, and so on. Impossible to describe in a script without coming across as obsessive - and naturally, explaining any joke removes the humour.

I think this illustrates why those people who go into screenwriting thinking it's an easier option than novel writing are deluding themselves. It may be less physically punishing on the fingers, but communicating an inference or an atmosphere or an unspoken thought in a single line of action or a few words of dialogue is much more difficult than using half a chapter of prose.

I'm always struck when I read a good script at how little is on the page. But true simplicity and clarity, as we all know, takes a hell of a lot of re-writing.

What was that saying quoted ad ifinitum by English teachers? "I didn't have time to write you a short letter so I wrote you a long one."

thanks, I loved seeing that Six Feet scene disected and discovering what was really going on inside Alan's head

To me the key is to just say what you want to happen. Not physically, but what you want the experience to be. Sometimes you can do away with line after line of complex description to just say - Paul entered the room like he was the only guy at a cheerleaders conference. Its enough for the actor, without treading on their creative toes. Same for the director. They get what Paul's enterance is about. They can then fill in detail of what that looks like and how to film it!

I remember reading in one of William Goldman’s books that he often flouts convention to include explicit subtext description. This is because he has a pretty dim view of directors and isn’t convinced that they’d ‘get it’ (his words) otherwise!

One point about that script excerpt: it seems to be flouting what I thought were two cardinal rules:

We see;
We follow him – he circles around us;
Reverse angle on David;
Closer on David;
He looks crazier than we’ve ever seem him’

All this in a scene which probably lasts thirty seconds! Directing from the page = no, using ‘we’ breaks the spell and reminds us that we’re reading a script.

As an experienced script reader what’s your opinion? Is this type of scene description more permissible in the US than it is here? Or are these writers proving that they’ve never been trained and are simply being allowed to get away with it because they write well?

Or are these rules losing their currency?

Even if this is a so called shooting script it doesn’t make it right. The usual procedure is for a director to issue a shot list for those who need to know and not have the script itself littered with random references to camera angles.

Personally speaking, as someone from a directorial background, I HATE to see specific directing notes on the page – I’ll choose my own angles thanks very much!

However, I have less of a problem with ‘we see’ and all its derivatives as long as by using these terms the writer is alerting me to something that is dramatically significant in the scene which may otherwise not be obvious.

So what is the current thinking on this issue?

I don't mind WE SEE or REVERSE ANGLES but I don't like them used in every sentence, only when they're necessary. Ideally, for new writers with spec scripts, they should be kept to a minimum or not used at all but I'm not going to dump a script in the bin just because it says We See or uses a specific direction from time to time. I think the Six Feet Under extract was directed by Alan Ball so he was writing for himself (plus he's proven successful with his writing so whatever style he uses is going to be okay).

I read the White Girl script, and that has loads of directions and feelings etc. Is that because it's the finished product and not a spec script?

Or is that just Abi Morgan's style do you think?

Loved that script by the way.

A lot of professional writers will get away with heavy description in their scripts, especially if it's a commission, or they've already established their name.