Spent the last two days mainly sleeping and eating but with lots of thoughts bustling with post-Cannes energy. One of the most commonly overheard phrases along the Croisette was: “I’m so passionate about film”. And one of the most obvious observations about the Festival was that passion doesn’t necessarily equal talent.

The bad films I saw at the Festival were so obviously borne out of a passion for film but the filmmakers faltered with their communication and expression, and didn’t succeed in transferring their cinematic ardour into satisfying entertainment. A certain amount of kudos and respect needs to be given for having the balls to get up, make something and ‘get it out there’, but in doing so you enter a whole new level of criticism, rejection, adulation and acceptance.

Film and TV has increasingly become the way we explore our humanity and seek to understand ourselves as individuals. This may sound a bit grandiose and excessive seeing as we’re saturated with reality shows and soaps but the media is the main communicative anchor for people to receive, digest and experience their emotions.

Take for example Paul Greengrass’s film United 93. As a filmmaker, he’s excelled himself with his craft and technique. As a cinematic story with dramatic entertainment value (that has to make money), it’s unclear whether it deserves its place in the market. But as a film that brings us a step closer to understanding the complex emotions of September 11, it’s a challenging and curative experience.

Greengrass’s passion and conviction for his subject matter, and his technique, is evident throughout. He’s got a strong and unique voice, a docudrama style that heightens the realism of his stories’ emotions, from Bloody Sunday to Bourne Supremacy to United 93. And that’s what we’re all responsible for as writers and/or filmmakers. We need to find our voice. Our passion. Our defining quality that makes our work noticeable, significant and rewarding.

Being passionate about film just isn’t enough. It’s what you have to say, and how you bring it to the screen. Basic filmmaking techniques will help but ultimately it’s the power and meaning of your story that makes all the difference. This is not meant to sound ostentatious or exclude genre fare in the argument. It just means that if you’re going to do it, then do it well. Otherwise you’ll end up at a market screening in Cannes with people walking out after five minutes, bored and uninspired. Quel domage…


Some photos of the trip...

"When's the next meeting?" 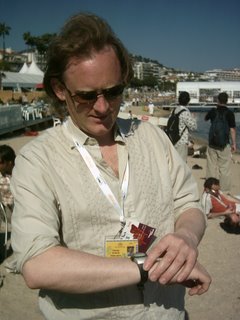 "Tim has an executive Coke." 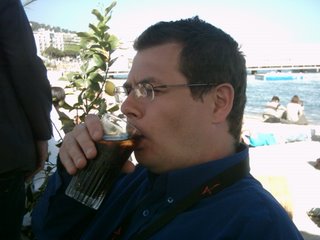 "Suki strikes a Bollywood pose on the red carpet." 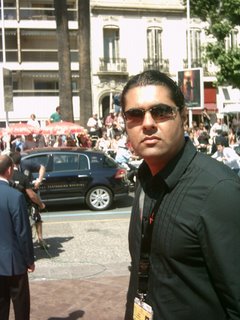 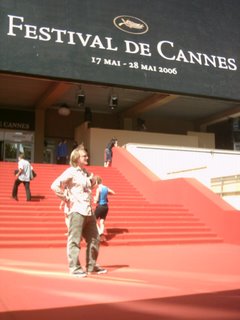 I hope you took a high factor sun cream?

Slightly toasted on the first day but all freckly and brown for the remainder...!

Thanks Danny, as someone who's never been, but would like to next time, I've been reading your Cannes-ologue with interest. Now that you've had time to reflect, I'd be interested to know, do you think it was worth it? In pure career terms, do you think you advanced your project/s significantly? Made enough new contacts to make the trip worthwhile? Or is it too soon to tell?

Okay, I had to backtrack to “Day one on the French Riviera. Hah! Suckers,” but I greatly enjoyed your Cannes travelogue and film reviews. Thanks much!

enjoyed reading your blog. I was there too (and saw you a couple of times in the UK pavilion) and also blogged. Hope you get some fab things happening as a result of your Cannes trip

Hi Sal, thanks for dropping by...

Ugh! I hate it when people say they have a "passion" for something. It must have sounded good once, but now it's the worst sort of overused buzzword. I hate it with a passion.

Shut up and let me drink my coke in peace - bloody paparazzi!

And Danny - remember the people we met who had lost their passion for film. That's even worse to see.