The name may not be over-familiar to you but James Watkins has been a rising star on the UK screenwriting scene over the last few years. When I used to read for Working Title, I came across James's development scripts fairly regularly and was always impressed by his lean prose, his stylish storytelling and compelling characters, giving me a bad case of writer's envy.

He got his first credit on My Little Eye back in 2002, and went on to write the tense backpack thriller Gone a couple of years ago. He's established himself as a stylish genre writer to rival any of our slick American counterparts. It is no great surprise then that he has made such an assured debut as writer/director with Eden Lake (currently on release), a white knuckle horror/thriller that even the Daily Mail can love! Want to know more about they guy? Read on...

Congratulations on Eden Lake. For those who may be unaware of the film, what’s the pitch?

I’m more interested in producers/financiers listening to the story than glib one-line pitches- but I was amused to read in the trades that they were pitching it in America as ‘Straw Dogs meets Stand By Me.’

Where did you get the idea from?

I wrote it three years ago, way before the current media feeding frenzy about youth crime. There was no specific inspiration, but I had a sense that there was an interesting generational conflict- a powder keg of adults fearing children, cycles of violence- that could be explored in the context of a thriller…

How long did it take to write the script?

After a lot of thought, I wrote the first draft in two or three weeks. But then there were two years of refining and improving. It’s the thinking that takes time, not the writing…

Development was a joy- I’d advise anyone who can: work with Christian Colson. He’s a wonderfully smart and supportive producer- you can’t ask for more. As part of the process Christian financed two short films. Primarily, these were development tools, enabling us to refine ideas in the story, see how they translated from page to screen. But they were also a great opportunity to cut my directing teeth and bed in a crew. Lastly, they were fantastically helpful with funding: when you take a script to a financier and they like it, the first thing they ask is: great, so who’s directing it? The producer coughs and replies: it’s the writer. Long silence, pained wincing. So here we were able to hand over a DVD and say: here, watch this…

What were the biggest challenges you faced as a debut writer/director?

The technical aspects of film-making can be easily understood and are great fun. As Orson Welles says, it’s a big train set. Working with actors was the newest thing for me and my actors were very patient with me. [In pre-production, Christian set up various meetings for me with the great and the good, to garner advice. One well-known playwright gave me the best advice: ‘Don’t cast c**ts.’ I heeded his advice and thank him to this day.] As a writer, however, it’s important to remember that you have an immediate affinity with actors: unlike a great many commercials directors who think about the shot, you think about motivation. Just as actors.

What was the biggest thing you learned as a director?

To trust your instincts. There’s too much mystification of the process and game-playing directors are particularly guilty of this. It’s bullshit. Hiding their insecurities behind talk of shots and lenses and stocks. These are all important, but only as they serve story. What matters is story. As a writer, I’d seen enough directors who forgot that…

Has it affected the way you approach your writing?

Massively. I write now much more with a mind to how actors will read. Which is akin to how an audience will watch- they care about characters. For me, it’s all character. Also, I’m more careful about writing EXT. LOCATION – NIGHT. Because that will mean it’s me in wet-weather gear on a freezing night shoot!

Would you recommend that more writers become writer/directors, or try to get more involved/take control of their work?

If you have an appetite for it. It depends on the writer. It’s very different sitting alone at your desk to standing in a field with seventy people asking you what to do. Some writers communicate brilliantly through their writing, but less well in person. Having said that, if you want to do it, don’t be intimidated. Directing is an act of interpretation. Writing is an act of creation. The blank page is far more terrifying than anything the director has to face.

I like Vogler. The hero’s journey guy. Fundamentally, they're all Aristotle’s Poetics. Three act structure. Surprise and inevitability. Everything else is padding. I think ‘the negation of the negation’ is a very unfortunate expression. Manuals are like maps: they can help you where you’re going, but can’t teach you how to drive.

I started out as a runner, in development and then on the production floor. At the same time, I was a script reader for Miramax, FilmFour, British Screen. Then David Heyman came over to be Warner Bros’s eyes and ears in the UK- although I can’t claim any credit at all for finding Harry Potter. I was the idiot in the office… At about the same time, a short film I wrote got me in the door at Working Title and I wrote exclusively for them for several years- which was a wonderful place to learn.

What would you consider to be your first break into the biz?

Working for Stephen Woolley as a runner- then the director Mike Radford’s American assistant didn’t get through UK customs and I got his job!

Who are your influences?

I’m not sure you’re always conscious of your influences. Or, if you are consciously influenced, then that is a dangerous thing. As Bob Dylan says, ‘you are what you eat.’ So all the films I’ve ever watched. And books. And art. And experiences.

Absolutely- but hopefully not as a gun-for-hire, but someone able to maintain a voice.

Any advice for budding screenwriters?
Write, write, write. As Beckett has it, ‘fail better.’ Everything gets better with work.

What’s next for James Watkins?
I’m working on a period ghost story and a contemporary thriller. But, next time, something with more consolation, more tenderness…

Thanks a million, James!

If you haven't seen Eden Lake yet, get thee to a cinema post-haste. 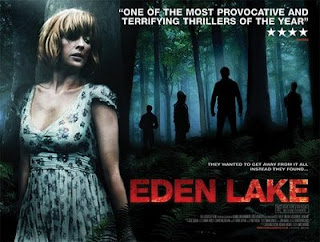 My Little Eye is one of my favourite horror films, so I'll definitely hunt down Eden Lake asap. Nice.

Congrats to James. I've heard it's fab! Will deffo go and see it.

great post-thanks for putting it up. Saw James talk at the 1st Screenwriters Festival- will definitely check out 'Eden Lake' when I'm though my current 'bottleneck' of work.