We've been shooting the film in story order, pretty much, so the third day sees us move away from the house to cover the all-important scenes that occur in the hospital. This particular location was the most problematic to pin down, mainly because of budget but Ben, once again, manages to make the impossible happen and we secure an entire disused ward in Hemel Hempstead for a knock-down price.

Miriam Skelton, art director, does such a good job of dressing the set that I mistakenly think that the hospital has re-opened the ward for general use (good ol' Miriam; I nabbed her at the last minute and she came on board with bags of energy, ideas and enthusiasm, not to mention oodles of talent).

I'm particularly nervous and excited about the day's filming because the story significantly progresses around the hospital scenes, and there are more set-ups required to cover all of the stuff the actors are lined up to do. It's good to see Peter Landi as he rocks up to play the doctor. Just a couple of scenes but vital nonetheless, and he does a great job (thoroughly convincing as a doc).

The amount of stock I have left to finish the film hangs around me like a grey cloud but I try not to let it affect my mood and energy. I'm determined to do things as swiftly and efficiently as possible without compromising on quality. Luckily for me, the crew and actors are on top of their game, and the first part of the morning goes well. I even start to think that I could finish early so that everyone can enjoy some semblance of a Saturday night.

My brother Michael and his friend Kieran arrive on set (flying in from Dublin especially) and they are quickly dispatched to costume & make-up so that they can be extras. They're giddy as schoolchildren and bring an infectious good mood to the set (My brother: "I only work in computers, I don't do anything fancy like Danny." Me: "Don't worry, I'll be working in computers after this.") His presence gives me a real boost (thanks Mike). 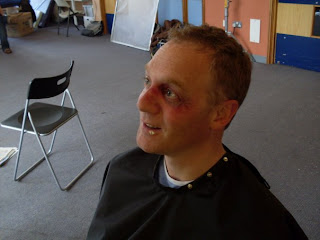 We don't have the luxury of on-set catering for the weekend so we negotiate a deal from the local Indian restuarant, and it's curry for lunch! Delicious! But um, maybe not such a great idea as most of the crew, lights and equipment are all crammed into a hospital room for the remainder of the afternoon.

It's time to shoot the key scene of the day (the second most important of the film). I've been looking forward to it but know we can't overdo it. We do one rehearsal. Lee Ross does his take. Nails it. We have it. Move on. Katy Carmichael does her take. Nails it. We have it. Gate's clear. Move on. Jack Blumenau is in his SFX make-up and has to lie in a hospital bed all day, hot & stuffy, but he doesn't grumble once and gives his co-stars everything they need for their big moments. It's a wrap for the day. 6.30pm. Not exactly the 'early' I was thinking about, and I squeeze an extra half hour from David DOP to nab a couple of useful shots. 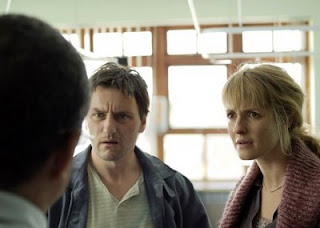 Post-wrap, I spend the evening with my wife and our Midlands-mate Jonty Bates (who's joined us as runner/extra for the weekend) walking Watford High Street looking for a nice bit of grub. We manage to find a decent kebab house, away from the teeming throng of scary Saturday night revellers. Mmm, curry for lunch, kebab for dinner. Parp. Roll on day four!

Cor... nothing worse than the smell of a fella filled with two much curry and kebab... Unless he's also crammed in some pork scratchings and five pints of Guinness as well of course!

Sounds like a dream shoot, Big D. I might just go starry eyed myself next time I see you... ; )

I love that actress!