Recently, over at TwelvePoint, Kate Harwood (BBC Controller of Series and Serials) gave an interview (subscription required) where she said that there was no substitute for writers seeing their work on screen, what she called flying hours: "if you want to be a professional television writer you need to see your work produced because that is the only way you really learn." 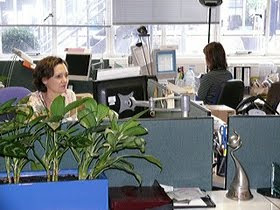 What she means is that while you may think your script is perfect or cannot be trifled with, you still don't know what an actor will bring to a line of dialogue, or what a director will bring to a set-piece, or how the production design can make or break a scene. You only get this from seeing your work produced.

The production process will change your script. The interpretation will be different to how you imagined. It won't always be what you consider to be for the best. There will probably be at least one scene, or moment, where you think: 'gee, that's not how I meant it at all. Wasn't it clear?' There well may be an improved scene or moment, thanks to an actor or director, and you can bask in the glory as your friends praise your talent and vision.

As I finish up post-production on Origin, my short film, the most frequently asked question I get is: "how has it turned out as opposed to how you imagined (or wrote) it?" When I was first asked, I thought it an odd question because it was my script, I didn't change anything. I shot what I wanted. The actors made a few suggestions and line changes but the story and structure remained the same. I'm very happy with how it's turned out. It's how I imagined it. 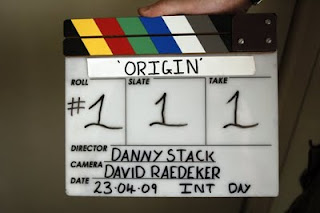 However, as my TV credits grow, I'm beginning to become more and more aware of the 'flying hour' process. Some scripts have turned out well, some not as good as expected. Some scenes have fallen flat, or dialogue hasn't worked (equally, a dramatic line is suddenly funny) or the director didn't pick up on what I thought was clear in the script. Or someone, somewhere, has completely changed the script with their own ideas.

This is not down to Writer Vs Production. A lot of the time, it's down to interpretation (an actor's choice, a director's vision), or, quite simply, practicalities (director didn't have time to get the coverage; didn't need that scene etc). Visiting sets, watching the process at work (or even doing it yourself), that's how you really learn about your writing. What works, what doesn't, and more importantly, WHY.

Screenwriting gurus know the value of craft but know little about production. Similarly, a lot of script readers and development folk will espouse on the theory of script without the real knowledge of how it might turn out on screen. As a former reader, I've been guilty of this, but I've also learned valuable lessons. Occasionally, you'll read a terrific script but the end result will not be as good as the screenplay. There's the rub. Screenwriting is so difficult, so subjective, so open to various interpretations, it's difficult to know what's hot and what's not.

Keep learning what works and why, then try to make it as clear as possible in your script so nobody misses how it should be played! In a recent commission, I convinced the editorial team to do a scene slightly outside the normal parameters of the show. In my head, it works beautifully but I have no idea how it will actually turn out on screen. We shall see...
by Danny Stack at 10:23 am

Defo true. There's no substitute for seeing your work made, it's the ultimate learning tool - and I would add that it doesn't matter how you do it, either if the commissioners aren't knocking your door down. DIY filmmaking is just as valid a learning curve (you don't have to be the director!), as is working in the corporate word if stuff like training vids, adverts, virals, etc.

Never having the experience of seeing what I've wrote in production, (Iz a NOOB) I'm fascinated by the concept. It's what's turned me on to screenwriting in fact. The ensemble nature of TV and film. That it may not turn out like I intended but grow and become something new. That's what truly art is in my opinion, and I await the day I can experience it.

Congratulations! Your readers have submitted and voted for your blog at The Daily Reviewer. We compiled an exclusive list of the Top 100 screenwriting Blogs, and we are glad to let you know that your blog was included! You can see it at http://thedailyreviewer.com/top/screenwriting

You can claim your Top 100 Blogs Award here

P.S. This is a one-time notice to let you know your blog was included in one of our Top 100 Blog categories. You might get notices if you are listed in two or more categories.

P.P.S. If for some reason you want your blog removed from our list, just send an email to angelina@thedailyreviewer.com with the subject line "REMOVE" and the link to your blog in the body of the message.