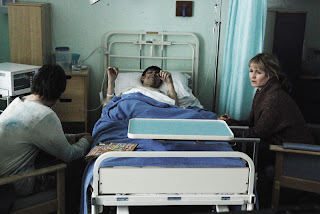 I started developing Origin, my short film, in January of this year. By the end of April, I had a cast and crew, and we shot the film over four days. Editing finished in July (although not much happened in May as we tried to get completion funding). Music was composed, then re-composed. Sound design was signed off, and the film benefited from the full digital intermediate experience at Ascent142. All of this was achieved on a modest budget, a huge amount of goodwill and favours, not to mention vital financial contributions made via the blog and Twitter (thank you!).

At the moment, I'm waiting to mix the sound and music together, and play out to a master tape. That'll be it. Done!

I've been struggling to find a place to squeeze me in for the sound mix (as I have little or no money). I had imagined that the film would have been finished (and premiered!) by now. One or two more favours should see me past the finish line. It's been a terrific experience, with a truly top cast and crew, and I'm already itching to direct again. Post-production has been the most stressful part of the project, and I have missed not having a proper producer to help me. However, the film is looking great, and I can't wait to get it out there!

If you work in post-production and could help out with the mix, or recommend somewhere that could accommodate my low-no budget, then do let me know. In the meantime, here's the trailer again:

What a mammoth effort. Very impressive.