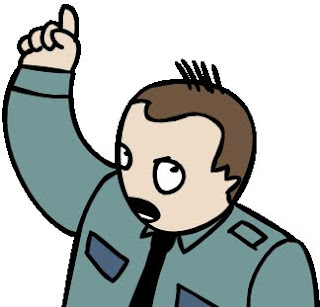 My regular co-writer Sam Morrison is a busy beaver, as ever, currently weaving his magic on a new project called Grime City P.D. It's the colourful successor to Sam's Rocket Science, a black and white spoof of 1950s noir and B movies (runner-up for Best Comedy at the British Animation Awards 2008). From the short, it was clear that there was huge potential in the idea, especially the gruff, politically incorrect lead character, Captain Jack Hersey.

So, the only logical conclusion was to develop Rocket Science further, and make an eleven minute pilot, renaming it Grime City P.D. in the process. Based at a backwater police station in the USA, the show centres on xenophobic paranoiac Jack Hersey and his cohorts, forensic scientist Patricia Murdoch and trainee officer Billy Sherbet.

Sam managed to nab some development funding from the good people at South West Screen, helping to make Grime City a truly "360 degree" project as the shiny interactive website gets built and Jack puts the world to right on Twitter (follow him!), not to mention the cool comic strip that accompanies the show.

In the pilot, which will be finished by March 2010, Jack’s boss and mentor Chief Thrower is sacked for an accounting discrepancy and Jack resolves to set matters to rights - until that is, he finds out who the new chief will be. While Jack leafs through the executive toy catalogue, it’s left to Patricia and Billy to find out what’s really going on…

Follow Jack Hersey on Twitter for updates or even report a crime if you want to get involved or know more.

If you missed the results of the Julie Gray one page screenwriting competition, click here!
by Danny Stack at 10:17 am

Thanks for that Danny... we're trying to generate some interest/following before the film is ready, which will be in July. So the website (thanks Helen!) will continue to grow with more news and 4-panel strips plus a longer-format comic-strip adventure, where Jack has to discover who cut the brake cable on his car...

And Jack will continue to be obnoxious and backwards on Twitter.

A line of shoes Nike Air Max is first released by Nike in 1987. Since its introduction, Nike has frequently introduced new and updated models in the same product line. "Tube Air" which is visible in several small circles on the midsole of the shoe, "Total Air" which is basically just another word for full Air Max cushioning, "Tuned Air," which is a system of individual pods supposedly "tuned" to different areas of the foot.