If there's one thing more frustrating than the gap between procrastination and writing, it's the wait for a potential commission or a reaction to a pitch/meeting.

It's an agonising time because it's the important business end of screenwriting - waiting to hear if you've got the gig or not. Paid work. A commission. A credit. A rewrite. A development deal. Whatever.

'The Wait' is an inevitable part of the process, no-one is immune. Even more agonising is the wait for competitions and schemes to get back to you as you cling on to the slim hope that you might have been shortlisted or won a prize.

In the previous post, Jamie asked about how to navigate the gap between having your shadow script approved by a continuing drama and finding out whether or not you'll get commissioned. What's the time in between approval and commissioning like?

Well, as you can imagine, it's no fun at all. You can barely focus or work on anything else because you're anxious to get the news whether it's a 'yay' or a 'nay'. As the silence festers, your brain rides the roller coaster of two distinct possibilities. One, they love it/you, and it's in the bag. The script is genius, you can't see how they could possibly turn you down. Confident. Two, come crushing down with the thought that the reverse is true, and while the meeting/pitch/shadow scheme went well, there are 5 trillion better writers up for the same gig, and you can't possibly get it.

Unfortunately, there is no simple way of knowing whether something has gone well or not. I've been in interviews, pitches and trial opportunities where I thought I did terrifically well and I couldn't possibly miss out only for the crushing rejection to follow and bring me back down to earth.

When you do shadow schemes/trial episodes, they are usually dealt with by the script editors who work on the show. This means that their priority is the real writers and broadcast episodes for the series, so it may take them a while to assess your trial script. 'First draft, script editor notes, second draft' is the norm so waiting a few months for notes and/or a decision on your second draft can seem like an eternity. The script editors are busy so you've just got to wait. 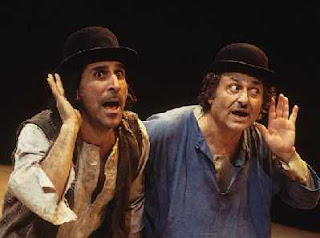 The first time I tried out for EastEnders, the wait was about six months, and it was a frustrating experience. Now, however, they've completely streamlined the process and it's someone's job to focus exclusively on the shadow scheme, so the wait isn't as bad. For my second try-out on the show, there was a quick turnaround for script notes, and about a month or so before I got the nod on my 2nd draft, and it was a much more enjoyable experience.

In general, trial scripts bring about the worst case of The Wait, but the silence and frustration lurks between every pitch and meeting. It's not uncommon to NEVER hear back from a producer at all, even when you've made a pitch, which is just plain rude whatever way you spin it. It's far better to receive a rejection than to face the infinite silence of what could have been.
by Danny Stack at 10:16 am

Thanks for that, very insightful. At least we all feel the same pain!

So once you got the nod on your 2nd draft, was that cork-popping time? "Well done, see you at the Commissioning Meeting next Michaelmas?" Or did you still have to wait for a chat with the big cheese to talk up the show, your ideas, make sure you wear the right shoes?

Completely agree with that last line too -- "It's far better to receive a rejection than to face the infinite silence of what could have been." Man, the silence kills.

I remember shedding a tear over a beer! That was in May. I got the actual commission in December, which was then on telly the following May!

Brilliant -- always good to hear a success story. Sounds like another agonizing wait there, but when is it not. Cheers.

It's good to know that every writer seems to go through exactly the same thing during the horrible empty chasm of waiting!
It is comforting to realize that regardless of whether you're just starting out or a seasoned veteran with many credits under your belt - none are safe from the 'The Wait'!

I feel so much better now knowing that I'm not actually going mad! :D

At the risk of being of little comfort, it never ends. I've pitched episode ideas for 7 series of New Tricks and got most of them on screen. Must be doing somethign right! But I still get that sinking feeling as I wait for the reaction to my latest pitch. I convince myself that this is the year I wil be "found out" and sent packing. It sucks but it comes with the territory.