Well, that was fun! Thankfully, no signs of the stress and nerves that made up the cast & crew screening in July. Instead, just a sense of excitement of watching the film with an audience who had no attachment to the project whatsoever. The film played as part of a programme called 'Absent Sense', presumably a theme to indicate that the stories didn't necessarily explain things or come to a rounded conclusion. And as the films started to screen, it was clear that this was indeed the case.

First up was Latitude Chase, which was 35 seconds of a child running through the hubbub of the Latitude Festival (shot on an iPhone) before arriving at her tent and being told to go to bed. Inexplicably winsome!

I think Sign Language was next, a film about a guy's last day as someone who holds those street signs on Oxford Street. Really sweet and emotive, and not surprising that it won this year's Virgin Media Shorts (you can watch the film via that link). Nice.

Then came Missed Connections, about a lovelorn guy who decides to respond to the 'missed connections' column in the newspaper in an attempt to meet women. Good idea, and some nice acting/dialogue, but it could have done with some judicious editing to make it a tad shorter, in my humble opinion. 22 minutes long!

Red Shoes saw Beth Winslet walk through the woods with an unsuitable pair of red shoes that catch the eye of a sinister creature who remains hidden in the thicket. Some enjoyable moments here and nicely shot.

Bad Call was about a guy who suspects his girlfriend of having an affair and goes to confront her lover with murderous intent. Really enjoyed this one. No dialogue, lots of creative visuals and filming techniques. Fast-paced and effectively done. 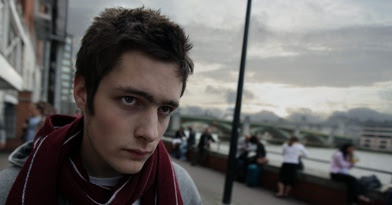 Meet Pursuit Delange starred James Callis (from Battlestar Galactica) as a hapless media type who can't seem to do anything right. Very funny performances, quite enjoyable, and felt like it was a pilot for a series.

Popping Round was about two girls having a catfight over the same bloke, which was playful and fun.

Origin played 7th out of the 10 short films on offer. Some people had left by this stage. I think short film programmes should be an hour, max. Anything more than that stretches people's patience, I think. Still, the film seemed to go down well. My heart rate was easily beating double but it looked great on the big screen, and in glorious HDCAM projection.

Next, Stalker, a short about a guy who finally realises he's being followed by an emotionally unhinged woman. Really good performances and direction, amusing and dramatic, and left you wanting more.

The final film was Interlude, a film about two swimmers who don't acknowledge each other but both fantasise about more intimate interaction once they're underwater. Lovely underwater sequence, a playful score, and had a relaxing effect!

To the bar then for some swift pints with Piers, Tom, Ben and Jo. Quick chat with the guys who did Stalker, then off home for the train. You can see a similar review of last night's screening at this site, where Origin is described as 'clever and understated'.

Really nice night, great to see the film 'out there' and hopefully this is the beginning of many a festival. I'll keep you posted, natch.
by Danny Stack at 12:53 pm

Glad to hear things continue to go well! Hope it'll eventually make it somewhere I can see it, too. :-)

I'm not surprised Origin went down well - tis a great film.
Glad you could chill and enjoy it :D
Good luck on all those future festivals!