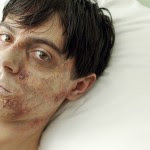 A couple of screenings of Origin will take place this week, one as part of the London Short Film Festival this Thursday 13th January (full details here), and the other as part of the British Shorts Festival in Berlin on Saturday 15th January. I'll be at the London Short Film Festival screening, so if you're going along then hopefully see you there. Sadly, I won't be in Berlin for the weekend but if anyone reading does go, please let me know how it all went.

I'm delighted that Origin is finding an audience on the festival circuit. I always knew it was difficult to get a film accepted into any festival but now I realise it's nothing short of a miracle! Don't believe me? Then read this blog about one filmmaker's particular experience.

So far, Origin has played (or will play) at Brancharge, Raindance, London Short Film Festival and Berlin British Shorts, and next month has been specifically invited to screen at Shortcutz London. Not a bad run but I hope it'll screen in a few more. It's expensive and time-consuming to continuously enter festivals, so it's now down to select submissions rather than an all-out attack. On the plus side, the film has recently bagged a deal with Network Ireland TV, one of the leading short film distributors, so that should ensure some form of festival afterlife. Nice!

In other news, I didn't win Shine's Big Idea competition so a̶ ̶c̶u̶r̶s̶e̶ ̶o̶n̶ congratulations to Nick Alderton & Sam Callis, and Stephen Keysworth for their winning pitches! I'm chuffed to have made the shortlist with Sam (down to the last 7 out of 730), and very much enjoyed the pitch and overall experience. I'll blog separately on how it all went, so stay tuned. In the meantime, see you at the London Short Film Festival. Yes, yes, yes, you will you will you will, turn this opportunity up, Thursday, your name's Rowntree. At the very least, check out the trailer below, or visit the website for photos and other info (the Facebook page has loads of photos).