Part 3: How I Made A Web Series

At this stage in the process, I decided that Liquid Lunch would be 6 x 2 min episodes. Initially, I was thinking of 5 eps but the way the story was shaping up, I knew I needed an extra ep to round things up properly. We had four scripts in 3rd draft shape, so we set up a small rehearsal space in Dan's flat, and got to work. 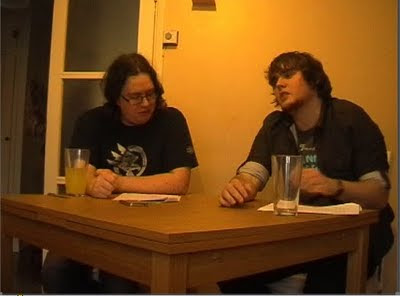 The scripts are entirely dialogue driven. In this case, the page per minute rule doesn't apply, especially for the quick delivery that I had in mind. Each script was running at about 4 or 5 pages. I used a DV Cam to record Dan and Chris go through their dialogue and see how everything was panning out.

We did each ep a few times, and discussed the lines that didn't exactly work or needed a bit of revision, or to keep the story on track. That's an important note: to keep the story on track. Although it's dialogue and gag driven, I was keen to keep the comedy focused on the characters instead of just cramming in jokes and asides for the sake of it (very easy trap!). I didn't want to do amusing sketches, I wanted to tell a story.

At the end of the first rehearsal, we knew we didn't have certain things nailed (the right tone for performance etc) but we felt a bit more confident about what we had to do to revise the existing scripts. I assembled a rough edit of the rehearsals, and this gave us some decent perspective on how to get the project into better shape.

We met again for another rehearsal a few weeks after eps 5 & 6 were written. I didn't film the guys this time. We just went through the material from start to finish, and chatted about what felt right and what could be revised further, or binned. We were all happy with the general flow and direction of the scripts, and agreed to just tweak and fine-tune from here on in. So, with the scripts almost locked, I set about getting the production together.

Next up: location, crew, production!

New to 'How I Made A Web Series'? You've missed:

How It All Started
Writing & Casting

Thanks for sharing the process Danny. It's interesting to read how it took shape. in