Part 5: How I Made A Web Series 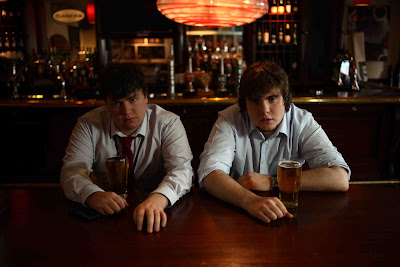 5am Get up and make bacon butties for the crew. Also make sure other goodies are packed and ready to go, not to mention double check vital equipment and props.

6.15am Pick up the actors who are staying at my mate Jeremy Lawson's place. Jeremy was a vital cog in the development wheel of Liquid Lunch (and a fairly handy screenwriter himself, he recently won Screenplay of the Month on Trigger Street) but, alas, he has a day job that he can't get out of, so he won't be able to join us for filming.

6.30am Arrive at the pub. Slightly worried that the landlord won't be there, or will have forgotten, but he's there, he's open and eager to let us get on with things. 'Right, I'm off back to bed, see you later', he says cheerily. I love this man. Johnny gets cracking with tea and coffee, and the bacon butties are sharply consumed.

6.30am-8am Andy and Chris set up and fuss over the shots like the ARTISTES that they are. Dan and Chris get into character. Emma wires them up for sound. I walk around with an important blue folder to make it look like I know what I'm doing.

8am Episode 1, take 1! It's a rehearsal take really, and it goes quite well. The actors know the material backwards. Andy's suggestion of using two cameras works a treat as we can get Dan and Chris's mid-shot coverage at the same time.

We do each episode two or three times, and do any necessary pick-ups, although the eps are short so sometimes it's just as easy (and useful) to do the whole take again.

1.30pm Time flies by. I was worried about running out of time before the pub officially opens at 4pm but we're ahead of the game and nearly done, give or take a few more, um, takes. We've shot about 15 minutes of script with a basic wide shot and mid-shot close ups. This was always my vision for the show; to make it clean and simple, and give it a look almost like an online comic strip, if you will.

2.30pm It's a wrap! We start to tidy up. The landlord reappears, having not bothered us for the entire shoot, and offers everyone a drink. I really do love this man. We enjoy a swift half and begin to disperse, showbiz hugs all round. 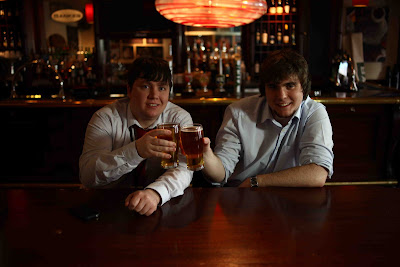 With the shoot in the can, I head home and load up the footage on my computer, where I spend the next four/five weeks getting to grips with Final Cut Pro and editing it all together. I create the website, start getting the word out there, and set a date for launch. And now it's here!

I'm so glad it's *something* now rather than just an idea or unmade scripts on my computer. The series launched on Friday 27th May 2011, with episodes 1 & 2, simultaneously on the blog, Twitter, Facebook, YouTube and the main Liquid Lunch website.

Everything is free to share for everyone, everywhere, so hopefully it can find an audience beyond my immediate social network. We had such a great time making it, and I hope you enjoy the show.

Coming soon: 'Tackling The Internet', the continuing saga of 'How I Made A Web Series'.

Where to find us:

Good work buddy. Very impressed on the self made bacon butties! Looking forward to seeing the final product.

Yay, DANNY! Love the detail and blow by blow account of all of this. Congrats, and I can't wait to see and read more!