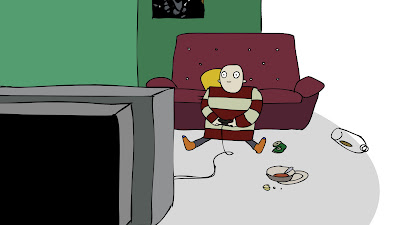 Some of you may be aware that I do some regular co-writing with Sam Morrison (animator/writer/director/Everton fan). Crikey, ever since 2000 in fact, when I script edited a pilot he was doing for Channel 4.

Since then, we've adapted Conrad's War, an award-winning children's book by Andrew Davies ("the script perfectly captures the spirit of the book"), written our much-loved Aliens FC as a script AND a book (getting close to production, publication and awards on numerous occasions), and also written many pilots for various production companies that have been awesome but sadly never been made or gone to series.

If you want to know why I love working with Sam so much, then you simply must check out his latest 5 minute animated short, Greetings. It's about a neurotic card designer who has a rather unorthodox idea for a greetings card, which suitably represents his ever-growing disillusionment with life. Voiced brilliantly by Michael Rosen! 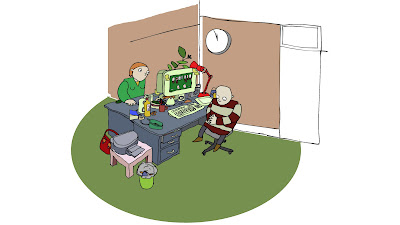 Greetings is up for Shooting People's Film Of The Month so if you're a SP member, please do watch and *LIKE* it to help it win.

Go on, it'll cheer him up. He supports Everton, remember.
by Danny Stack at 11:32 am

Only because I can't bear checking for insightful development notes and staring at that zero, I'll try and be a bit insightful myself about the development of the film.

This is a sort-of-sequel to my graduation film 'Balls' (you can watch it here www.theevilgenius.co.uk) which was about a relationship break-up. Ten years on, Henry still finds himself disconnected from the world and has essentially learned nothing...

Michael Rosen was an absolute legend and did the voice-over (as he had for 'Balls') for next to no money. He adopted the narrative voice not only for the recording but for pretty much the whole day we spent together, really inhabiting Henry's world. Not only that, he began - unbidden - sending me stories about Henry in emails as we pondered another film, a comic, something else... Mr Rosen is a gem of a man.

Inevitably real life has got in the way of more projects thus far but we remain hopeful of doing more with the character. A big thank you in advance to anyone who likes it - especially if you 'like' it.