Had to endure truly appalling weather on my way to the train on Thursday night. So much so that once I hit the nation's capital, I had to buy a new pair of shoes to avoid walking around the whole weekend with squelching feet.

On Friday, Day 1 (keep up, yeah?), I had dutifully broken in these substitute shoes (£25, JD Sports, BARGAIN) by shlepping around Regent's College and Maryleborne High Street, happily teasing fellow delegates with the promise of delicious kebabs.

Saturday morning, then. Day 2 of the Screenwriters Festival. I'm ready to rock. That is, I'm ready to write! Instead of going directly to the mother ship, I stay put at my hotel, trying to make up for a few hours of work that the shenanigans of Thursday and Friday sucked up.

Despite being mildly hungover and not having much sleep, I have a Full English and load up the laptop. I put the #LondonSWF on standby to keep me up-to-date on anything that I might miss, and I get cracking on my current rewrite. Three hours later, and I've done solid writing work, and am ready to join the throng.

First up, at 2pm, 'Don't Wait to Be Discovered' by Christian Routh. Here, Mr Routh laid down his key tips about sales and marketing, and what a writer might need to consider when packaging or developing a script. Loglines, taglines, synopses, teaser trailers, etc. Useful stuff all round.

A brief networking break followed, and I was all set to attend 'Writing Fantastical TV' with Messrs Arnopp et al, until a unexpected twist of fate right at the last moment found me at the 'Failure to Launch' session, about why the first ten pages of your script are crucial. This had some golden nuggets of wisdom and advice, which was suitably packed-out in the main hall.

The subtext to the whole day though was 'FREE BAR' and this affected many people's choices of attending the final sessions of the day. Unsurprisingly, a good handful of delegates (me included) formed a random queue for the free bar that was being lined up by the Wellcome Trust at 6pm. There was a sudden scrum of orders, and poof, just like Keyser Soze, the free bar was gone, just like that. Cheers!

Lots of networking and good banter available here, and I finally get to catch up with Robert Thorogood, writer of Death in Paradise (via Red Planet Prize!), who I literally haven't seen since we had one too many cosmopolitans at Working Title's Christmas party in 2007.

By 9pm, with beer flowing, I need me some food. Luckily, Tim Clague agrees, and we rope in writing pal Rudolf Kremers for a curry down the road. It turns out the to be the BEST CURRY IN THE WORLD, no word of a lie. Tim's photo proof: 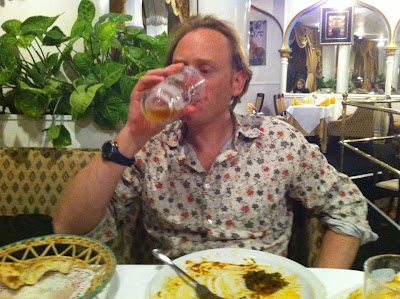 As I digest, I try to programme my new digital wristwatch (seen above) to accommodate the clocks going back but I get myself into a muddle, and suddenly, by my reckoning, it's 8pm. Tim and Rudolf mock me for my pathetic understanding of time, and we head for our hotels.

On my way back, I bump into fellow writing Corkman, Brian McEvilly, who tries to tease me into a local pub where a merry band of screenwriting delegates are enjoying a nightcap. Do I accept? HELLYES. Hey, you only live once you know, 8pm or not. One pint later and the barmaid says it's midnight and we have to go. MY WATCH SAYS IT'S 9PM, SHE HASN'T A CLUE, HAHAHAHAHA!

I fix my watch to the right time and return to my hotel, having a good chinwag with punk-haired Sean Kelly on the way (not Irish, or Cork, as far as I know).

For some reason, my WiFi service at the hotel is improved but my Bluetooth on my phone isn't working, so I can't update my photos of the day/evening. Instead, I can only regale you with photos stolen from Tim's Facebook. What time is it again? 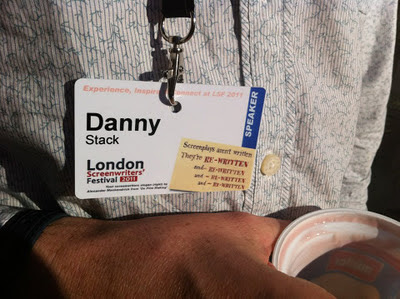 (Me and an empty tub of yoghurt. It was raspberry.) 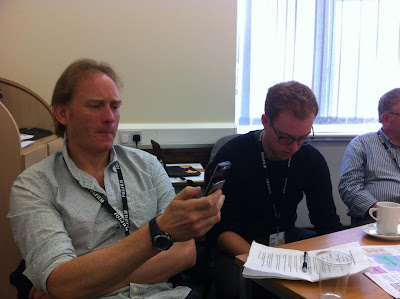 (I share an HILARIOUS joke-text with Chris Hill but he remains unmoved)
by Danny Stack at 1:10 am

Insightful and entertaining as always Danny. Nice one!