As I type, it's the day before the Red Planet Prize deadline (Monday 16th January), so I'm sure a lot of you are getting your first ten pages ready to send *any* *second* *now*. I'll pretty much have my head down over the next few weeks reading the entries, not to mention busy with my own writing deadlines, but I just wanted to mention two networking events that might be of interest (especially to those local to Bournemouth/Poole): B-REEL and Prequel to Cannes. 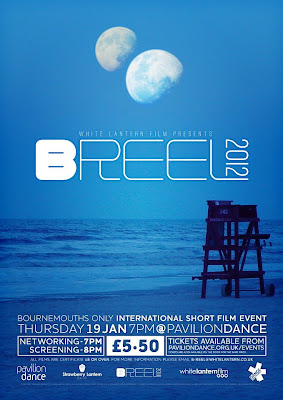 First up, is White Lantern Film's B-REEL film networking and screening event, which this month takes place on Thursday 19th January. B-REEL is the only place in Bournemouth to see some of the world’s best award-winning short films programmed exclusively by FUTURE SHORTS, SHORTS INTERNATIONAL and DAZZLE FILMS. You can also submit your own short films to be screened through B-REEL SHORTS.

It all happens in the heart of Bournemouth at Pavilion Dance (great venue!), Westover Road, Bournemouth BH1 2BU. It's a top night out of short films and networking, so toddle along if you're free.

Also in Bournemouth, Rosie Jones has been running Prequel to Cannes networking event for the last few years, each time getting bigger and better than before. This year, she's pulled out all the stops, and has made the event a two-day networking and workshop extravaganza, taking place at the Lighthouse Poole (my absolute favourite arts venue, ever!).

I'll be doing a couple of workshops about being a jobbing writer and taking steps to be a director, Tim will be talking about his Cannes experiences (along with local legend Suki Singh), and Bang2Write will be doing a Pitch Factor, and there's lots more, so you MUST come along. Even if you're not from the area, it's quite cheap to travel down to Bournemouth for a day or an overnight stay, so we'd love to see you.