Recently, in amongst my usual routine of reading & writing (and the odd bit of directing), I've been doing a fair few talks and workshops. It's always nice to be asked to do these types of sessions. They're usually a lot of fun and I like the interaction. Mine tend to be a mixture of studying industry standards and expectations combined with insights of my own experiences or my own take on a well-known topic.

The year kicked off with Prequel to Cannes where I did TWO workshops: Taking on the Role of Writer/Director & How To Write for TV. These were nicely contained workshops in the Lighthouse Poole cinema (my favourite venue). During the lunch break, I spectacularly fell off the stage onto the seats. OUCH! Luckily, no-one was there to witness the foolish fall. Although, if I had done myself a proper injury, I would have been waiting a good hour for anyone to find me! *Embarrassed* Later, I suitably recovered to take the stage again as I was part of a panel about going to Cannes (alongside local legends Suki Singh, Tim Clague and Alice D Cooper). 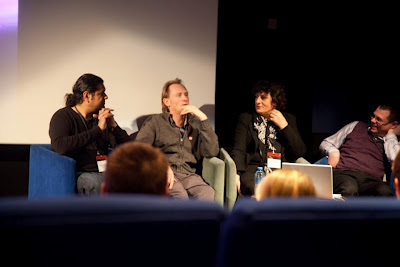 A few weeks ago, I went to the Isle of Man to do a short film workshop for Mannin Shorts (huge thanks to Poker Stars, who sponsored the event). Mannin Shorts is run by two creative powerhouses in the shape of Dave Armstrong & Christy DeHaven. Dave has written & directed Ghostgirl, an impressive short film, alongside his many other activities. Christy's a singer/songwriter/DOP/photographer who can probably add any creative skill you care to mention to her long list of interests. I met them for the first time over the weekend but it was like meeting old friends, and they took good care of me, showing me the best of Manx hospitality. During the short film workshop, I went through the history of short films (how/why they started) right through to the present day, and why they're still important. Here's one of the very first short films ever made!

For more details and insights from the course, including various soundbites from yours truly, then the Mannin Shorts blog is the place to go.

During St Patrick's Day weekend, the Southern Script Festival opened its doors again to student screenwriters and anyone else interested in Courier Pt 12 shenanigans. Here, me and Tim were invited to run a talk on 'Writers Who Want to Direct'. We compiled 10 tips on this topic, which Tim then put in a fancy prezi-tation, which you can watch here. Basically, though, the top 10 tips break down as follows:

VISUALS
1. You're a screenwriter, you already have vision!
2. Visual grammar. From wide shots to close ups, get to know the ABCs of filmmaking.
3. Watch out for 'The Writer's Disease' (filming 'he said, she said').
STAGES
4. Know the production stages.
5. Shooting/editing cycle.
6. The edit is the final draft of the script.
WORKING AS A TEAM
7. Casting - what can an actor bring?
8. Sound - the forgotten art.
9. Letting go.
FINALLY
10. Forget everything, and just do it.

We rounded up the festival with an interview with horror guru James Moran for the UK Scriptwriters Podcast. Catch some of that audio action here.

I also did a few talks in a variety of schools (from unruly teens to uni students to animators) talking about working in the media, and what to expect, as well as listening to pitches. There's an amusing irony at play when you break down the practicalities of what it's like working in the biz. It always sounds like grueling work, faced with impossible hurdles and constant rejections, yet by the end of the talk, everyone's usually inspired or determined to make it happen, no matter what! It's the gift and curse of being a creative: knowing that it's going to be endlessly difficult but that there'll always be that inner-voice that keeps pushing you on, and on, and on... until you fall off a cinema stage when no-one's around!
by Danny Stack at 12:15 pm