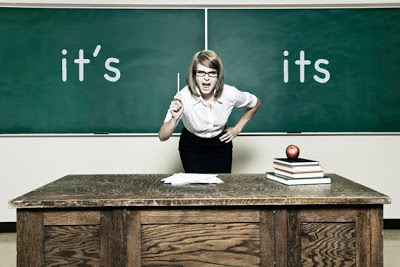 Where to put a possessive apostrophe? In the world of text messages and abbreviations courtesy of sending email 'via my mobile device', it may not seem to matter anymore. For mobile communication or truncated messages on Twitter, maybe, but in screenplay form, it matters a great deal. Why? Because your you're a writer, and if you want to be taken seriously, then you've got to get the basics right.

It's = It is
Its = A possessive pronoun, e.g. 'The cat licked its paw.'
This gets so commonly misused that it's practically becoming acceptable to use It's instead of Its. A neat way to avoid the trap is to remind yourself that It's is always two words. When in doubt, say the two words in full, e.g. "The alien protected it's eggs." The alien protected it is eggs? I don't think so.

They're = They are
Their = Possessive pronoun

Your = Possessive pronoun
You're = You are

These are the most common offenders in the scripts that I read. It's disconcerting. You may think I'm being pedantic but when you read a script with no typos or grammar discrepancies, it makes a huge difference, and the writer or writing stands out with more distinction.
by Danny Stack at 4:19 pm

There's a faster way of distinguishing between it's and its.

You could also just do as I did and buy one of these handy t-shirts as a constant reminder to those around you: http://twitpic.com/b2d4mv

That's hilarious (and brilliant), thanks!

ooooooooor you could just go with the constant evolution of language and accept the way our language has changed?

I actually scripted and voiced a video about using apostrophes, earlier this year.