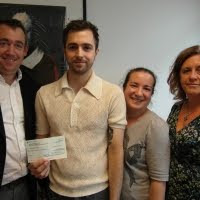 Jonathan Neil has been announced as the winner of this year's competition, with his script, Darby and Joan, a 1950s tale of spies in very British suburbia. The script beat more than 2000 other entrants to win the coveted prize and the opportunity to be mentored by both Red Planet and Kudos.

On announcing the winner, Tony Jordan said: "This script was a real page turner, great characters inhabiting a unique world and, as you finished it, you wanted to know what happened next. I read a lot of scripts and you'd be amazed how rare that is."

Neil commented: “I am delighted to have won the Red Planet Prize and to have this unrivalled and privileged opportunity to continue developing my script, and gain some great insight and experience into the industry.”

As ever, I'm very proud to be part of this writing scheme as I know what it's like to be a new writer, and also know what it's like trying to maintain your career even when you get a break. It's great that Red Planet and Kudos are so supportive of new writers through the competition, as they're two of the best companies in the biz.

Details of the 2013 Red Planet Prize will be announced at the end of the year.
by Danny Stack at 9:51 am