One of the top tips from the '50 Screenwriting Survival Tips' (that I hosted at the recent London Screenwriters' Festival) was: Do Favours/Help Others Out.

It can't be stressed how important this is. It's always nice to be nice, and in a screenwriting or industry context, there are many benefits to doing someone a nice turn. As Joey in Friends has taught us, there's no such thing as a truly unselfish act. At the very least, doing someone a favour will generate good karma from when the time comes when you need a favour from someone in return. Everyone wins! 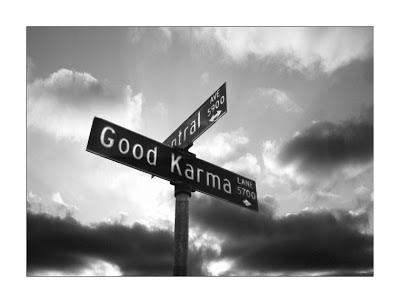 Anyways, last week I helped out on a music video with my filmmaking heroes Suki Singh (his debut feature Emulsion out soon) and Andy Marsh (who directed Keane's latest music vid, which Tim helped out on, and Andy helped me out on Liquid Lunch as cameraman).

I got a text from Suki at the last minute. Did I want to work on the music vid, no pay, long hours, early start. TEMPTING, RIGHT? But I love Suki. He's a great guy, and a fantastic filmmaker, and I knew I could learn heaps from him, especially as he was shooting fancy slow-mo action. I WAS IN!

**VIDEO SHOOT BLOGGAGE**
The video was for Loadstar, a bass music duo, and their new single Black & White feat Benny Banks, a catchy hip hop dance tune. Suki and Andy had come up with a loop narrative for the video, about a guy trying to save his suicidal girlfriend, with a lot of the key dramatic action in super intense slow-motion. 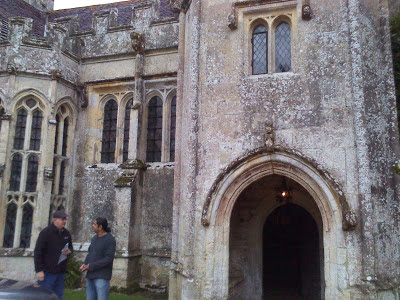 We shot the interior (a luxurious bathroom with copper bath) at Athelhampton House in Dorset, a gorgeous location, ideal for any number of productions. Me, Suki, Andy and actress Harmione Halpin travelled from Bournemouth, and met Tom and Peter from Sandstorm Films, who were producing and filming the shindig. The most important person on set, though, was m̶e̶ John Hadfield from Greendoor Films, who was in control of the Phantom Flex HD slow-motion camera. It was fascinating watching John's set-up and learning about the camera (at 2,500fps in HD, the Flex will record for approximately 4 seconds. 10 seconds at 1000fps, 20 seconds at 500fps: we shot at 1000fps and 1500 fps), and it produced some genuinely stunning footage. Here's a photo of John's set-up: a monitor feed from the camera hooked into his computer for recording, which is then transferred on to Peter's laptop (Andy Marsh in background). 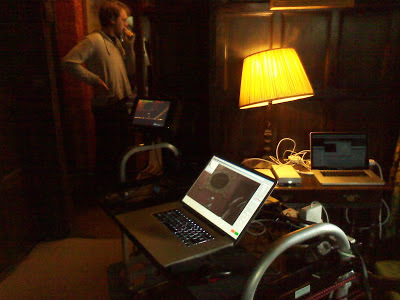 The good thing about a small cast and crew for a shoot like this is that you can stay close to the action, and learn lots. Plus, it's always nice to meet and chat with new and interesting people, like Tom, Peter, John, Hermione and the lead actor Chris MacDonald. I was in charge of tea/coffee/snacks, general lugging around, some lighting/camera assists, and making sure the bath water stayed at the right temperature for Hermione. This became a problem when the bath's hot water tap ran out but Athelhampton's staff were very helpful in fixing the problem, and provided me with buckets of boiling hot water from the bar, phew! 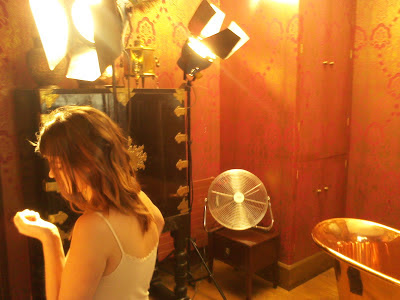 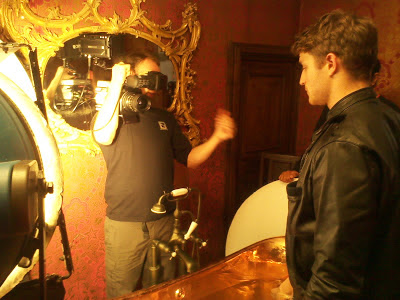 We filmed slow-mo for the whole day, and wrapped at around 5pm. Then, it was straight back to Bournemouth, shove a sandwich down the gob, and prep to shoot Benny Banks do his rap to camera in the urban landscape of Bomo. I was in charge of playback, nice. 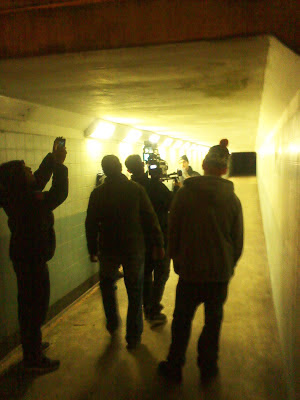 Once that was done, we got local car-rig/stunt maestro, Aidy Ward, to rig Suki's nice Porsche with a Canon 5D to get some cool shots of Chris at the wheel, Driver/Ryan Gosling style. We also grabbed some shots of Chris and the car on the Red camera. 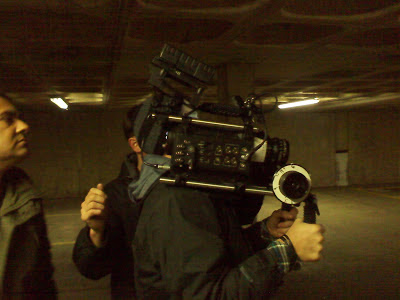 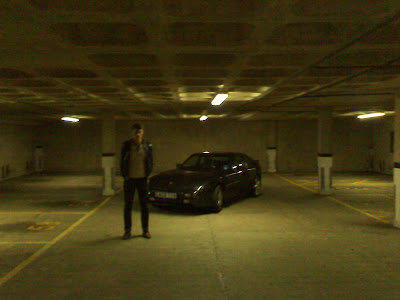 Once that was done, around midnight, it was a wrap and we were all ready to go home. A long but enjoyable day, working with some very cool people, and I can't wait to see the finished product. UPDATE: have just seen a rough cut, it does indeed look AWESOME. You can watch the finished version on YouTube here.
**VIDEO SHOOT BLOGGAGE ENDS**

Where was I? Ah yes, help someone out. Do someone a favour. Work on a short film or music vid for free. Read someone's script and give them feedback. Share stuff. Do whatever you can. It's a great way to build contacts and strike up positive working relationships, as well as benefiting from return favours somewhere down the line.
by Danny Stack at 11:11 am