TL;DR? Writing comics, short film casting, another swim and time for a beer.

I get up at 7.30am, have some yoghurt & muesli, along with the strongest cup of tea in the history of the world, and I'm at my desk by 8am. I tweak the comic I'm doing for VS Comics, taking on board editor Mike Garley's suggestions, and Issue One is signed off, wahey! Issue One! Gosh. It's a two-part story, twelve pages in total, so Issue One (six pages) makes it sound like it's an epic saga. Not that I'm complaining. And, well, it is kinda epic. You'll see. It's been terrific working with Mike as I was completely new to the format so had a bit to learn about how to go about things. Swedish artist Kristina Gavhed has made my scripts come to life brilliantly (she's doodling on Issue Two as I speak) and I'll do a shout-out when everything's available (check out VS Comics' other issues here).

The comic tweaks don't take too long so I move on to the scene-by-scene outline. Yesterday, I got to the end of act two so I spend a couple of hours outlining the final act, and it feels GOOD. I now have a pre-first draft that I can spit and polish over the next few days, prior to next Wednesday's deadline.

At 11am, I start the casting process for my new short film. It's a kids/family-friendly short called Nemesister about a young boy who's constantly teased by his older sister who just happens to have super-human strength but when he discovers he has the power of telekinesis, he decides to get revenge on his nemesister... It's a fun story with some lively VFX, hence the VFX meeting yesterday. For the the first casting session, I audition a child actress for the titular role, and we have a nice chat. A bigger casting session is scheduled for Tuesday but it's good to get the ball rolling.

Afterwards, I head to the post office to send my signed contracts to my agent (for the scripts I'm working on). When I return, it's nearly lunch time already. I'm starving so LUNCH IS QUICKLY DEVOURED. I stuff my face in other words.

I move on to do script notes for the script I read yesterday, and then take time-out to cycle to the beach and have a quick dip in the sea (like Tuesday). By the time I get home, I'm feeling quite tired. I stick a chilled bottle of beer in the freezer for half an hour to give it an extra zing, and I kick back for the evening, having called it a day. 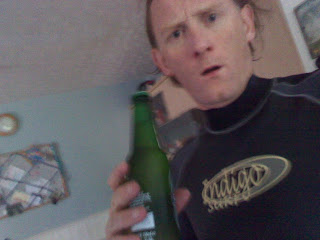 I could spill the diary into the weekend but it's only more short film prep, which I'll blog about separately. Ironically, diarising the week has helped me focus on my workload rather than give in to too much procrastination, so it's been fun and worthwhile for me. I always surprise myself with how much I can actually get done once there's a deadline (or two) and/or I get into proactive mode. Thanks for reading and hanging around; I hope you got something out of it, too.
by Danny Stack at 6:08 pm

Tx for doing this, it's nice to spy on you! - and compare with own habits, good and bad. This scene outline is just four or five pages, but takes so damn long. It seems I have to think all the action through in my head. Then shuffle the sequence around, or put in an extra scene. But it's just not as much fun as writing the script itself.

Thanks, Lina! Yea, scene outlines can be a grind but definitely make the script easier (and more fun) to write.