Quick recap of diary events (day 1 here). Yesterday afternoon (see Twitter for occasional updates), I left my home office for a change of scene. On my way to a local cafe, I got ABSOLUTELY SOAKED in a heavy downpour. Plus, my Macbook (now classified as 'Vintage', i.e. Apple will no longer update/service the old model) alerts me to say 'um, I'm on my last legs here, guv, you better upgrade pronto'. Both incidents serve as two good 'down to earth' lessons if you start crowing in your blog about your busy working week. Don't worry, there are other times where it's less busy, lonely and, well, a bit miserable. I'll blog about that separately, you lucky people.

I returned home at around 5.30pm, having made some headway on two scripts, and a purchase of a new Macbook Air (waving my new credit card around online with gay abandon). I finished the day with a bit of script reading. Feeling wet and tired, I took a hot bath (rare for me), had a bite to eat, watched TV, and had an early night in anticipation of an early start.

TL;DR? Get up early, get loads done. And there's a photo of me eating a muffin.

I get up at 6.45am. A few months ago I experimented with early starts (well, early for me), to see if I could increase my productivity. Getting up early has many benefits, the main one being you get a couple of hours' work done by the time you normally start your working day. Plus, there are fewer people online (Twitter, and so on), so there are fewer reasons to procrastinate. But I found doing it regularly was exhausting, so instead of every day, I do it occasionally, especially when my workload is busy.

After a bowl of porridge & honey, and a look at breakfast TV (IT'S THESE TRIVIAL BITS YOU LOVE, I KNOW IT), I'm at my desk by 7.30am but still feeling very bed-weary, despite the oaty boost to my system. I have a quick look online, do a Twitter update, and I start work on the outline that's due next week (I still have a deadline for today, and one for tomorrow).

Before I begin to write, the typical insecurities emerge. Yesterday it was different, as I worked from pre-existing scripts, so a lot of the hard work had been done. Now I'm facing the INTIMIDATING BLANK PAGE. Small doubts nag at me. What if I can't do this? Where do I begin? What do I do? It's going to be rubbish, isn't it? You'd think a writer would laugh at these insecurities, but no, they're pretty much there at every start to a project (not just me, right? RIGHT?!).

Luckily, I do have a beat structure laid out in front of me so I do know where to start. I'm still feeling tired but once I start describing scene 1, I wake up and get into the groove. By the time my wife leaves for work, I've outlined half of act one. What's important here is that I'VE STARTED. It's no longer a blank page, and my brain has latched on to the story momentum of where everything's going. I'm eager to continue as I'm enjoying it at this stage, but I stop, and switch focus to tomorrow's deadline script.

I move downstairs to the kitchen to fully change the mood and focus. The script is a first draft but technically it's a second draft as I'd worked up the story prior to getting the official commission (I was trying to ensure that I would definitely get the gig, so I wrote the script as a sample - sample scenes are sometimes requested but as this is a 10min ep, I just wrote the whole thing). This means I need to revise what I've done already and adhere to the script editor's notes. All good. It's 11am at this stage. My tummy rumbles, in a different time zone, expecting lunch. I have a cup of tea and homemade muffin to keep it quiet. Photo evidence below. Time to work on today's deadline script. 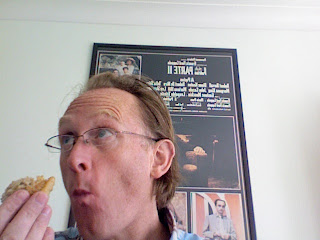 I work on today's deadline script, getting closer to the end (it's the quick rewrite I'm doing), but I reserve some time later on to fully finish. I have lunch (ham & egg on toast, since you ask), and, because it's sunny, I cycle to the beach and have a swim. This takes me an hour. Getting out of the house and grabbing some exercise (or fresh air) is essential (yesterday it was the poxy walk in the rain), and today it feels pretty good thanks to the refreshing dip in the sea.

On return, I focus on a script report for a director friend (his new film, very exciting) and then revert to the script rewrite, to finish that off. That's what I've got left to do today so I'm blogging now otherwise I'll be too knackered to do it later. Phew. More tomorrow!
by Danny Stack at 5:09 pm

I like this diary too. I'm at university doing scriptwriting at the minute, and they teach you a lot about writing but never to mention a writers life. Interesting stuff

Thanks, Connor. The thing is to try to balance the creative & the practical, as a full-time freelancer.