During all the bustle of Day 2, my new Macbook Air arrived at lunchtime (after my old Macbook requested a zimmer frame on Monday). I was desk bound until it arrived but once it did, I was free to take a break and have that dip in the sea. I'm not an Apple evangelist but in my experience, they work far better than PCs. I'm so used to the smooth running of a Mac that if I decided to go back to PC I know it would be a frustrating experience. A new Macbook is still a hefty chunk of change but I used a new credit card for the purchase (0% for 18 months, wahey!). Here's a photo, especially for the green eyes of Oli Lewington. 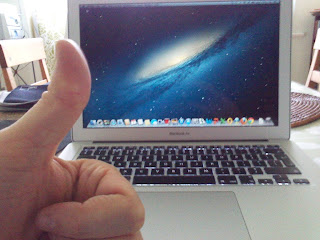 Day 3 of my writer's diary starts a bit later than yesterday. As my two script deadlines have eased somewhat, I get up a little later and am at my desk by 9am. I've only got one deadline left at this stage as the previous deadline was met last night after dinner.

I check my 'to do' list. It's not as full-on as yesterday; smaller tasks but still important things to accomplish. Nevertheless, I feel the immediate urge to procrastinate. I'm not sure why this is exactly the case. I don't like procrastinating in general but feel compelled to do it almost on a daily basis. It may be tied to the insecurity that the act of writing won't hit preconceived standards - the best work always goes unwritten, right? "I've got a great book! Now I just have to write it".

I don't mind a bit of pre-amble, a way to work up the momentum to dive into writing - check emails, the headlines, Twitter, and then, nothing to see here, go! I'm not even that good on Twitter. See for yourself as the #writersdiary hashtag takes the site by storm. Sometimes I bore myself with my updates (apologies to those who are kind enough to follow me).

Anyway, I manage to free myself of my procrastination urges. I use Joss Whedon's recent tip of 'start with the dessert first'. In other words, start with the task that you most want to do to get you in the groove. I choose to finish my script report for my director friend who's preparing to shoot his next film. I really like the script, and have regularly provided notes for the director on his projects, so this feels like a bit of a treat to read and assess.

I move on to today's script deadline, which is more or less ready but I go over the 15-page script a couple of times for last minute tweaks and polishes. Satisfied, I hit 'send' to the script editor, and she acknowledges receipt not long after (a small but grateful gesture).

It's around mid-morning, so I have a cuppa and decide what to do next. I line up the outline that's due next week (I started on it yesterday morning) but before I get to it, I noodle at three loglines and a two-page pitch I've had for a while. The loglines are for another director, to see which idea he fancies to develop, while the two-page pitch is an idea for a new kids' show. I've been talking to a producer about it, and she's been pushing me to be as clear and compelling as possible with the pitch. I finish the loglines and dive into the two-pager, taking on board the note 'for one small tweak'. This 'small tweak' puts me into a spin until lunchtime. It's still not right, but I need me some grub now.

After lunch, I put aside the two-pager and work on the outline, getting to the end of act one. Good progress. I take a stroll to the local shops for basic provisions, and then head on a location recce for my short film. I'm so not a producer but, with a short film, you have to assume a lot of the responsibilities yourself because well, who else is going to do them for you? The recce's not far away and takes me over an hour.

That takes me to as I type, and I've got a script to read to end the day, but I'll probably do that after dinner. Thanks for sticking with me. More tomorrow!