Get up when you want. Wear what you want. Do what you want. Working from home is awesome, right?! Well yeah, it is, especially if your normal working day is an office job, and you get to spend the occasional day at home privately reading/researching/catching up with stuff. That's quite nice. But on a full-time freelance basis, there's a bit of a flip side to working from home.

Essentially, it can create instant lazy habits. Sleep in, wear your PJs all day, not leave the house, not speak to anyone, surf the internet, watch TV, eat breakfast at lunch, eat lunch at dinner, surf the internet, watch TV, play PS3 (hey, it's research!) and then maybe, MAYBE, get some writing done by 1am. Go to bed, knackered, and sleep in the next morning, and follow the same semi-non-productive routine as the day before.

If this semi-non-productive routine works for you, then great, but there are better ways to get things done. Some writers build sheds in their back gardens, bespoke to their writing needs. This provides a cosy setting away from the familiarity (and family chaos) of the house, complete with WiFi connection and all writer mod cons. I think they cost around £7,000, all nicely fitted out, but your mileage may vary (and indeed, you may not have room for a shed). (If a shed option sounds expensive, then it's around £2,000 a year to rent an office space, so the shed should start paying for itself after a few years.) 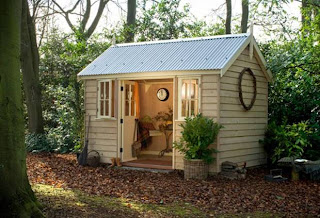 I've been working from home since 2000. That's 13 years. I never found it a problem. But that was because I lived in London, and moved flats twice between 2000-2005. And living in the capital, I still had the flexibility to hop into Soho, attend networking events, and not feel like such a recluse. I moved to Bournemouth in 2006, and thus began my longest spell of working from home, in the same place, day in, day out. But again, I never found it a problem.

However, everything changed when I made Origin in 2009/2010. The exciting interaction of filmmaking, and being a director, and being surrounded by so many creative/fab people, opened up a whole new side to my creative cravings. After production finished, I was far more restless at home. I wanted interaction, I wanted a change of scene. I wanted the psychological divide of calling it day and 'coming home' rather than simply putting the computer to sleep, sloping downstairs and trying to chill out but still have thoughts churning about work.

I started to mix it up a little. My local libraries in Poole and Bournemouth are terrific havens, especially Bournemouth, although modern libraries now can be noisier than a local cafe, especially with children's hour. And mobile phones! On one particular occasion, some gobshite sat in the middle of the library and went through every ringtone on his new phone, trying to select which one to use. AGONY! Local cafes can provide a nice alternative. A bit more of an enjoyable/acceptable buzz, depending on who's in there and what's playing on the speakers (please Caffe Nero, no more jazz). But even a library/cafe combo can be frustrating as there's no guarantee of the mix and noise that you're going to experience.

For the past year or so, that's been my routine - mixing it up between home, library and various cafes, and it's been OK. I've been cycling to the library, too, and using the bike a hell of a lot more as a result, so that's been a real plus. However, a new creative working space, called Nest, opened up in Bournemouth. Run by cool creatives in an equally cool location, it provides flexible working conditions for any type of creative. I was immediately keen and impressed so I signed up, and will be there two days a week, which gives me the flexibility to work from home but still mooch about to attend meetings, do the podcast, head off to London, and so on.

If there's a creative co-working space in your area, check it out, or better still, set one up! Working from home is awesome but it takes a special kind of personality to fully immerse yourself in it 24/7, 365.
by Danny Stack at 11:10 am

Yeah it's tough working from home and I have the added distraction of kids running around screaming and demanding biscuits, or asking me to take them up the park every thirty seconds, especially during the holidays.

Facebook is my downfall, especially messenger. It's so easy to get into a conversation with someone you've just seen pop up and before you know it an hour has flown by.

But I have my own space, my little room in the house with my own desk and computer and every weekday morning I make myself sit down in front of it at 9am and I work hard to not let myself get distr...oooh, on new member on my Facebook page...hold on, where was I..? Oh yeah, I try not to let myself get distracted until my dear lady wife comes home from work.

Somedays are easy, somedays are hard. The easy days make up for the hard days, so I tend not to worry too much. Unless I have a deadline. Then I panic. Lots!

Write I must get back to my righting.

Hi Danny,
What's your email address please? I tried to follow the link on your site, but it didn't work for me.
Thanks
Debs

Hi again Danny,
Maybe it would be easier if I sent you my email address? It's debfindlow@yahoo.co.uk
Many thanks