The uber-talented Chris Shepherd has been nominated (or is shortlisted?) for the Turner Classic Shorts Award 2006 (can't find a link) with his first live action short film, Silence is Golden. Chris has been an award-winning animator for donkeys, and has made some stonking films, more notably Dad's Dead, which was more a phenomenon than a short film. His star continues to rise, he works bloody hard and he's a great bloke to boot. Way to go Chris! In fact, Chris has also been nominated for a British Independent Film Award for his animation short (with David Shrigley), Who I Am and What I Want. There's no stopping him. Edgy, visual, energetic, interesting, compelling.

And news just in: The Amazing Adrenalinis has been nominated for a Children's BAFTA (Best Animation). That's very exciting so a discreet shout out to the creators Mark Huckerby, Nick Ostler and Dan Chambers, and Pesky Films for producing, and to all the writers (ahem, one of them being me). So a big Yahzaa! to everyone. Best of luck on the 26th November when the winner is announced. 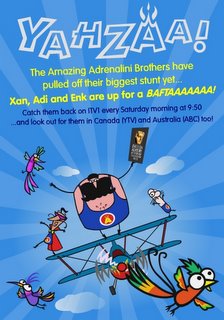 Thanks Danny, yeah it's great news and testament to the skills of the hardest working designers and animators in telly over at Pesky in south London (not forgetting their colleagues at Studio B in Canada!). What's more I can confirm (and I'm not just saying this 'cos it's his blog...) that the Hollywood based episode "Actors of Infamy!" scripted by none other than Mr D. Stack is one of our favourites. I'll do my best to let you know when it's on, but just to make sure you don't miss it, tune in to ITV every Saturday morning at 9:55 between now and Xmas!

A pat on the back to each and every one of you.