In 1999, I ran the Dublin marathon, partly because I wanted to do something to mark the millennium year but mainly because I knew I had to teach myself some discipline if I was serious about a writing career. At that time, I was happily working at Channel 4, and everything was fine. I knew I wanted to write but every time I sat down at the computer, I had the 'white paper syndrome': stare at nothing, write nothing, procrastinate, repeat. Not good enough. "A writing career is a marathon, not a sprint", people were often telling me. So I decided to take that phrase quite literally, and train myself to run the marathon. If I could find the time for the punishing running schedule, then, correspondingly, surely I could use that approach and determination to make myself actually write something?

So, I took a Novice Marathon Training Schedule off the internet, and decided to stick to that. Starting off slow, running about three times a week, then building up to six times a week, the distance increasing each time. My C4 job was fairly cushy, so I had the time to go to the gym at lunch times and my social life was pretty much the same even though I was fitting in various runs in the evenings and weekends. All of this told me that there was no excuse for not writing. You simply just had to do it. Anyway, the training lasted four months, and then I ran the marathon. I did it in 3 and a half hours, which surprised me (I was expecting more 4-4 and a half) but let me tell ya, I was more proud about the sole training than the marathon itself (which was great too, obviously).

After that, I took the plunge. I gave up the day job and went freelance, full-time, tentatively setting myself up as a writer. First, I worked on a couple of TV shows (Black Books, Ali G), then I swamped myself with scripts, reading as much as I could (and luckily, getting paid to do so), which helped me improve my overall standard of writing. So, I was reading and writing all the time, but not yet getting paid to write. But I was going to stick with it, no matter what, and now, nine years later, after many ups and downs, it's starting to feel like it's all been justified.

I know, I know. Running the marathon was a feat of writing procrastination in itself, and a bit corny, but I needed something to motivate me into getting into the right mindset, and it laid down all the determination and focus I needed if I was going to succeed.

Nine years after the marathon, I've been mainly holed up in my room, reading and writing. I sustained a back injury working on one of the TV shows, and it's caused me a lot of grief since then, which meant running was no longer an enjoyable passtime. Still, two back operations and lots of treatment later, I'm beginning to feel human again, and it was with great pleasure that I ran the Bournemouth Bay Run yesterday. It was only 5K (about 3 miles), a huge stretch away from a marathon, but just as significant for me (and phew, was I glad it wasn't longer). I was hoping to break the half hour mark, and I clocked my running time at 27 mins 02 secs (bit of a sprint finish!). Check out the photos below for some before and after action.

The run was all in aid of the British Heart Foundation so thanks to EVERYONE who sponsored me. If anybody feels like throwing a couple more quid my way, then there's still time to do so at the fundraising page. 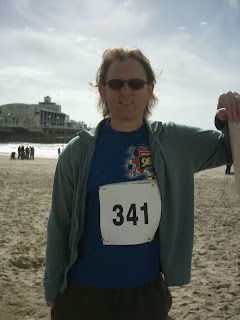 Chilling on the beach, just prior to race. 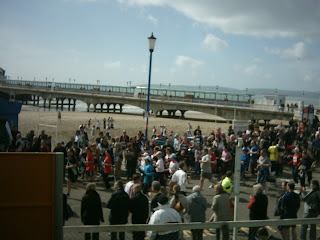 Start of the race. I think that's me, a bit blurry already, on the right hand side of the picture (2nd from right of the white post). 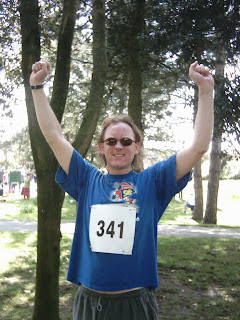 Yay! Good for you xx

As for writing... all I can seem to manage is blogging at the moment but screenwriting is calling me.

Well done. And btw, I'm glad you don't look like Rick Wakeman (sorry, but when I see your userpic I imagine Rick Wakeman)

Running by the beach? In the sunshine? In sunglasses? Looks like it was all a bit too easy.

How about something tougher?

I'm considering a sponsored not-going-to-the-gym. Would have made a shedload of money in the last six months or so...

Tom, I'll take the gentle stroll by the sea, thanks. Seaside Ultra, maybe. Lisa: Rick Wakeman? Sadly, I can see where you're coming from... Cheers, everyone!

Good work Danny. Now get back to the proper stuff! We've a book to write, damn your eyes.

Well done D! Looks like you cruised it and judging by your picture hardly worked up a sweat!