It's almost a week already since the first day of filming so I better write something down before the details become general pleasing memories. Pre-production was typically busy. I travel to London from Poole every day, which means early starts (5am) and inevitable long days; sometimes driving, occasionally on the train.

Casting comes together pretty well with Katy, Lee and Jack all confirmed and ready to go. Locations were pretty much in the bag, except for the hospital which was causing us some concern in terms of budget and where the hell we could find somewhere we could afford AND would be suitable. We were also short on a few key personnel. One particularly frustrating afternoon was spent on the phone trying to find the crew we needed but generally not getting anywhere. Luckily, I have The Amazing Mr Ben on the case. He knows everyone in the universe and starts plucking at the stars.

On the day before rehearsal, two days before filming, we do a tech recce, revisiting the locations we had confirmed and checking out a potential hospital that was up for grabs. Bingo, we have our hospital. Locations confirmed. Actors ready but still short a few key crew.

Rehearsals on the Wednesday. I'm a bit nervous about the cast meeting each other for the first time, and also about the fact that I have to lead the rehearsals/meetings with the rest of the crew. Everyone mingles and seems really into it, and Gareth Tandy, 1st AD legend, gives me a briefing on what to expect over the next few days. I don't go home to Poole that night, staying instead with production coordinator extraordinaire Sarah McKee (and roping her fiance in as a runner for the weekend!).

Thursday. 1st day of filming. Sarah and I arrive early on set. Catering rocks up and immediately gets the bacon butties going. The waft of tea, coffee and sizzling bacon soon has the assembling crew on their toes. We're okay for crew for the first two days but still need to chase a few key positions for the weekend. Ben and Sarah get to it. All of a sudden, I'm standing around the camera, Katy and the crew, ready to call action on the first shot. But I don't shout action. I get Gareth to take care of that. I'm the one who shouts cut (for boring technical and practical reasons but it's something I'm grateful for as the shoot progresses).

The day goes well. I don't feel overwhelmed or out of place because I know I can trust the crew to do their job while I can get on with mine, which is to fuss about the shots and the actors. We get a bit behind schedule but we still manage to do 17 set-ups (3 shy of our intended target: a lot!), and the actors remain energetic and upbeat throughout. The day proves to be a steep learning curve for me as I try to balance the producer stuff I need to be aware about (the amount of stock we're using, the cost of things that are NOT on screen) while keeping focused on the all-important on-screen activity: the actors and the story. 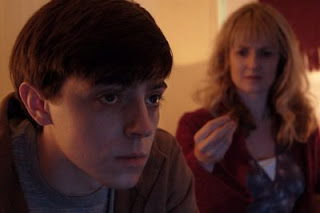 I finish the day pretty pleased and there seems to be a good vibe amongst the crew, which is great. The adrenaline keeps away the obvious tiredness but it's back to Sarah's, grab a bite to eat, and time to call it a day, ready for day two...

Great stuff, really wish you the best of luck with this short and hope it ushers in bigger and better things.

I agree. Looking forward to future posts and cant wait to see the finished product!

Gosh it makes me want to direct my scripts! very exctiting...

I also can't wait to see it! How will you be showing it? A screening?

Will it be on the internet, shown on TV, or will you be distributing it on a DVD? :)

Thanks everyone! Plan is to get it out to festivals, then film/TV distribution, DVD, then online. That's the normal route for a short film anyway.