Ah, if only I knew on day one what I knew on day two. Not that day one was a disaster, far from it, but the second day finds everyone settling into filming and finding our feet that little bit more. Little nuggets of wisdom emerge: it's quicker to do another take rather than talk about whether or not you need another take; if you have what you need on take one and the gate is clear, then move on. And seeing as I shot almost half the entire stock on the first day - yikes, I thought I was being economical! - these cautions become forefront in my mind.

So, we get stuck in. We don't have Lee Ross today as all the scenes involve Katy, Alex Avery (who's playing Mike), and Jack (Freddy). The schedule looks more straightforward than day one but I know there's a lot to get through, especially if I'm going to get the coverage I think I need to make the scenes work. Jack's SFX make-up becomes more pronounced, too, and that's going to be a big factor in one of the key scenes between Katy and Alex, so there's a lot to do. 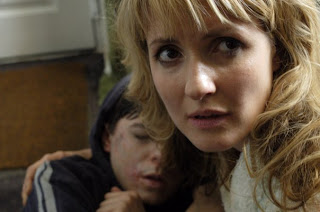 My lovely agent surprises me by visiting the set, and brings me a bottle of champers and some biscuits. Aw. I put them aside and forget all about them, so some lucky crew member no doubt picked them up later. Filming goes well and I get greedy for shots, asking for close ups & cutaways to make sure I'm not stranded when it comes to the edit. Gareth Tandy, 1st AD, nudges me along to keep me on schedule but I know I'm doing something right when he nods and agrees to some of my extra requests.

My wife arrives in the afternoon; the first time she's seen the crew and what's involved. We haven't seen much of each other during pre-production and while I've been keeping her updated on what's been happening, she didn't expect the proper hubbub of a film set; all the lights, equipment and trucks, not to mention the professional people working on my behalf. She freaks out when she hears someone on a walkie-talkie saying: "Danny wants an apple, will someone meet me half way?" This directing lark is clearly going to my head.

Towards the end of the day, we do pick-ups of what we didn't shoot from the day before - scenes that involve Lee but seeing as he's not there, Gareth feeds his lines off-screen for the benefit of Katy. They've worked together before and Gareth's got everyone at ease with his good humour and efficiency, so there's no problems. We get all our set-ups done and finish on time, more or less. That's it, no more house scenes. Half-way through the shoot. It's Friday but I have no sense of day, date, time or place. I'm feeling more comfortable about filming but I got to bed nervously excited about the next two crucial days. 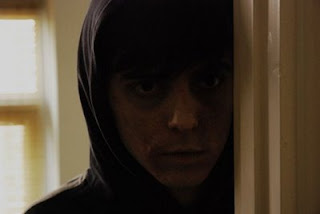 Very interesting. It sounds as though you're in your element.

Cheers guys, I did have a blast, and all your advice came into play PDolly, so THANKS, you're a star! xx

It loooks ace (even from the 2 pics).

What sort of fests you aiming for?