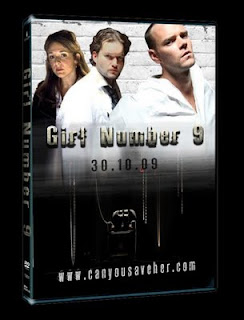 A new web thriller hit the net earlier this month, Girl Number 9, which marked the directorial debut of none other than James 'Who's The Daddy Now?' Moran. He wrote the script and directed eps 4-6, while Dan 'I Can Do Anything, Me' Turner directed the first three installments.

It generated quite a buzz and was very cool indeed, but in case you missed it, check out episode 1 below. The series will be available to watch for free until the end of November, worldwide, so get on over to the official website to be gripped by the rest. After that, it'll be on DVD, with lots of goodies and extras. It's a self-financed project with no big corporation sucking up the benefits, just creative types trying to do something fun and entertaining within a genre and format that they care about. Have at it!

D'oh! I miss everything me.

This is very cool.