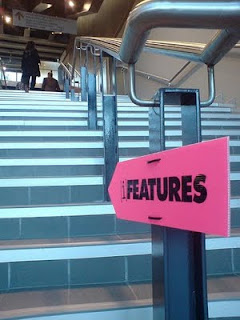 Lots of schemes and competitions about at the moment. The Story Works, Sky Movies HD comp etc (and I hope to have news about this year's Red Planet Prize soon). Here's another scheme that's most definitely worth a look. iFeatures digital feature film initiative from South West Screen.

Although it is a regional screen agency's initiative set up to promote Bristol as a cultural and cinematic location, it is open to submissions from creative teams nationwide. There's a development slate process and then three films will be made for £300k (BBC Films being one of the partners). Submissions must be made by post and the deadline is 12 NOON on TUESDAY 8th DECEMBER 2009. There's lots more info on the website, so check it out here. 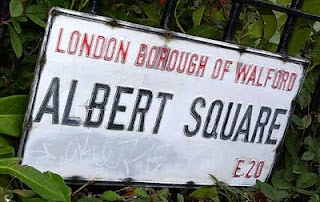 This is my second episode of 'Enders. I was more nervous doing this one than my first attempt, partly because it was a Friday episode (so I didn't want to let anyone down) and partly because I was only blimmin' following on from supremo writers Richard Davidson, Nicholas Hicks-Beach and Rob Gittins. So, like, no pressure. Still, I'm fairly pleased with the way it's turned out, so if you do watch, I hope you enjoy. Repeats on BBC3, iPlayer and the Sunday omnibus. (In this preview clip, I'm in the caff watching the actors on a monitor.)

Also nervous about Ireland playing France on Saturday. I predict 1-1 in Dublin and 0-0 in France (next Weds), thus seeing us (typically) bow out of the World Cup qualifying race. But come on the lads! Let's make it a weekend to remember!
by Danny Stack at 4:56 pm

We're supporting ya, Danny. I don't like EastEnders (too depressing and I'm not a soaps fan) but I always feel compelled to watch it when you are writing it.

Thanks, DS, appreciate it. I might be biased but 'Enders is on top form at the moment.

Great Episode last night pal. Loved the Lucas Bible quote and also I have a question. With this being you're 2nd time on the show you may not have had chance to write for 'Ricky B' last time around. Do all the writers have a poll to see who can fit the word 'Stupid' in his scenes?

Last night you had 'I bet you think I'm stupid?' Or words to that effect.

Anyway, Great episode and where can I get one of those T-shirts??

Ricky's not the sharpest knife in the drawer is he, but we love him for it. In this ep, he was afraid of appearing stupid in front of Sam for mucking up Whit's t-shirt order. His heart is always in the right place. Don't think the t-shirts are for sale. Cheers!

Is it difficult knowing the 'voice' of each character, when there are so many writers? Do the actors change the lines a lot? I know nothing about TV writing.. I'm intrigued.

It's B he should be trying to impress Daniel!!!!

You wrote that he and Sam were meant to be together(or words to that effect).

It's Bianca who he's meant to be with. When will the east end starts aline for that pair?

Writing for Larry Lamb must be a dream? He delivers his lines spot on. Is he lying? Does he really have cancer?
He's evil Archie one day and he's Lovely Mick Shipman next. Brilliant.

Any news on Red Planet yet? I've had my 10 pages sat on my desktop for ages gathering digital dust.

The Kid: you get to know the characters' voices so even though different writers might come up with a different line of dialogue to me, it would be true to the character. Actors might change lines a tiny bit but not too much in my experience. However, I did not write' For she's a jolly good baby!', lol.

Anon: Ricky tried hard with Bianca over the last few months but she rejected him, so he turned to Sam. Sam was his first love so he thinks (for now) that they're meant to be together. Plus, it linked in with my fate theme. I love Larry Lamb, and writing for him is indeed a dream. He does have cancer: his worst fear was confirmed in that scene with the doctor/Newton Cradle clicking.

No news on Red Planet. Soon, I hope.

Yours or the Director?

However, I did not write' For she's a jolly good baby!', lol.


Take it you saw Harry Hill then?

Newton Cradle/ticking clock was me, and director Michael Morris was fully behind it. Very pleased they let me do it.

It was a very nice touch.