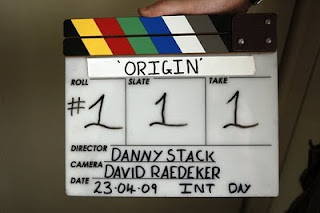 Nigel, one of the kind and generous souls who contributed to Origin, my short, has asked: what does one need to make a short film?

Well, in this day and age, you need very little. You can shoot and edit a short film using your phone and your computer. Or, you can throw a bit of money at your production and borrow/hire a digital camera, create homemade SFX, use your mates as actors, and bish bosh, you've got yourself a short. Or, you can throw a decent amount of wedge into the film and try to make something that will stand out from the crowd, that will attract industry plaudits, and maybe even an award or two. Presto, your Hollywood career takes off.

So, if you are thinking of making a short film, you might want to consider the following, drawn from my own prep/humble experiences:

This is the one where you'll shoot on anything. A camcorder, mobile phone, the video option on your digi-camera, or even using the built-in camera on your computer. Whatever. All you need to do is to write a script or a sketch that can accommodate a no-budget scenario, and away you go. I did this with my first short film effort, On The Death of His Wife. I decided I'd only shoot normal everyday things ('cos they wouldn't cost me any money) and once I figured out a bit of emotional context and voice-over, I had meself a short film I could be proud of. Shot it in one morning at my cousin's place while he was nursing a hangover and joking around with his flatmate's friend. The film has found an appreciative audience in America, thanks to YouTube.

This is where you throw a bit more money in. Not much but a little. All depends on what you have available. It could be the cost of a few pints or a night out, or a few hundred pound (or is that the cost of a night out these days?). The point is to make something a bit more ambitious than the no-budget short. Something that's still fun and valuable but shows a bit more talent in front and behind the camera. Something that might play at a film festival, perhaps. However, don't be limited by budget. Colin was, allegedly, made for £45, and that was a feature film. Paranormal Activity was shot on a camcorder, and that was a MASSIVE hit. If you can be clever, and have a story you want to tell, then perhaps think beyond short film. Think feature.

An actual budget! Actors! Special effects! A crew of more than two people! Caramba, you're making a film! This is the one where you want to show people what you got. You want to make a stylised, original short film that will wow the industry (winning short film festivals) and kick-start your career, or raise your profile at the very least.

A lot of short films are 'shot on digital, at the weekend, with your mates', which is absolutely fine (see 1 & 2 above) but for Origin I was willing to throw a substantial amount of my own money (and raise some online) in order to have a budget that matched my ambition and expectations. I wanted to have a decent stab at directing and show the industry what I could do. I rolled the dice. The financial expense was stressful but the experience was genuinely amazing, and I'm so glad I did it. ** UPDATE ** After a nice run on the festival circuit, 7 festivals, it won Best Horror Short at the London Independent Film Festival, 2012 ** UPDATE ** 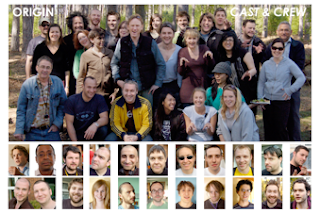 OK, so those are the key approaches. Now, the essential question: HOW?

Break it down into common sense chunks.

1. SCRIPT
If you want to make a short film, you'll need a script. If you're not a writer, find one. Do a shout-out on Shooting People or the blogs or Twitter or whatever. Watch a lot of short films in the meantime. Get a feel of the stuff people are making; why it works, why it doesn't, why it won that film festival, etc. Shorts are hit and miss. A lot miss. You want to avoid that samey quality. Do something fun, original or distinctive, if at all possible.

2. BUDGET
Decide on how much you can spend, or how much you want to spend. Think about fund raising initiatives. A pub quiz. Sell your car/body/soul. Raise money on your blog and/or Twitter. Ask all your friends/family for £20 each or whatever they can afford. Check out your local council for potential funds or investors. There's bits of money here, there and everywhere. It all adds up.

3. EXPECTATION
What do you want to get out of your short film? Do you want to make a no-budget film for the laugh, a decent short or a professional piece? Chris Jones set out to win an Oscar for Gone Fishing. He got down to the shortlist (ten short films) before the official nominations were announced. He didn't get nominated but he came close. The point is he aimed very high, right from the start, and has now got a professional film that has opened up a whole new world of opportunity.

4. CAST & CREW
Get help. But how do you get actors involved? What about crew? For actors, you approach their agents or get a casting director on board (I got Jeremy Zimmermann!!). For crew, you can do a shout-out on Shooting People or trawl through your local screen agency's crew database (highly recommended), or get referrals/recommendations. Then, you make a call and ASK. People will generally respond to your passion and personality, as well as your script, and the cast & crew jigsaw will start to fall into place.

The single most important thing I did on Origin was do a search for a producer on South West Screen's database. This led me to meet Paul Sarony, who became exec producer on my project. He introduced me to Benjamin Greenacre, line-producer extraordinaire. Up until this point, I had managed to get some crew together - casting director, special effects, DOP, art department - but once Ben was involved, he was a wizard in assembling a top-class crew and maintaining a high level of professionalism for the shoot. I was very lucky indeed. Every film should have a Ben.

5. JUST DO IT
If you think about it long enough, you'll convince yourself not to do it. Truth is, there is no excuse nowadays for NOT making a short film. Even if you're only vaguely interested, you could shoot a montage of stuff and play music over it, and you've got something to show your mates/family. It all depends on what you want to get out of it. There's no money to be made in short films. The audience barely exists. It's mainly for industry purposes; to showcase new talent. It's hard work. It's time-consuming. It's financially draining. But it's the best fun you can have with your clothes on (or y'know, off, if you're THAT kind of filmmaker). Whatever the case, if you fancy yourself as the next Neil Blomkamp, then you gotta get out there and make something.

Want me to read your script? Check out my consultancy page.
by Danny Stack at 5:41 pm

I have visited your site and I would say that I really enjoy reading the content. I'm sure your visitors find your site useful as I did.

Anyone thinking of launching into shooting a short should read this.

Amen to that. Listen to the man!

thanks for that, only just had time to get round to reading it, but nice one.

I would love to interview you for the next edition of my book
How Not To Make A Short Film: Secrets From A Sundance Programmer.

You flatter me, Roberta! I'm certainly no expert but happy to contribute if you think I can. My Hotmail's playing up so you could try dstack30 at gmail dot com, cheers!

What timing! You always seem to know just what to post.

A friend and I had just decided that 2010 is to be the year we finally start spending some money and making some of the many short film's we've written.

It really took us a ridiculous amount of time to realise you need to have something to show other than just scripts.

ShootingPeople.org seems like exactly what we're looking for, but I was wondering if you knew whether it has Australian contacts as well US and UK?

Great job writing this - it's great that you're writing stuff like this for people, not cutting on the details either-- great work!

Mutt - I'm not sure whether Shooting People has an Australia section but I'm sure a lot of members are Aussies, or would know of the kind of contacts you're after. Put a post in one of the bulletins, people are generally helpful in response.

Thanks Danny - I shall,