On Wednesday night, in Working Title Films' HQ, I held the cast and crew screening of Origin, my short film. It's been a long time coming. Regular readers will know I've been working on the project for a while now, and I received a good chunk of financial support through this very blog (for which I am eternally grateful). We finished filming at the end of April last year. Immediately after shooting, editing and post-production went quickly and smoothly enough, and all was looking good. Then I stumbled into frustrating post-production problems. Nothing huge but on a short film level, and with no more funds available, it put a real halt on proceedings. A year later, I managed to finally get the film in the can.

So, to say I was a little nervous about the screening would be selling it short. I wasn't nervous about the film, per se. I mean, yes, sure, a little bit but ultimately I love it, and if people don't like it, there's nothing I can do about that now. What I was more nervous about was hosting the screening itself. Not really my area of expertise. I don't really DO parties. I like to GO to parties, but I don't DO them myself. Plus, it had been a year, the crew were probably busy, or not interested anymore. What if they didn't turn up? Had I invited enough people? Had I invited too many people? What if no-one came? What if everyone decided to come along? Did I order enough food and booze? Too much food and booze?

London. Wednesday. I travel up to the smoke with Jo, my long-suffering wife, who puts up with my optimistic plans ('lets spend all our money and make a short film!'). We book into a Travelodge in King's Cross for the night. That's how we roll. Unbeknownst to me, there's a problem with the catering for the screening. No-one can get through on my mobile but with 15 minutes to go to set up, I get their urgent message, and manage to avoid disaster. It's hot. I'm wearing a suit. I start to sweat. It's 5.30pm.

We head into Working Title HQ. They're incredibly laid back and helpful. Food and booze has arrived and we go downstairs to the screening room to set up. Wine ready. Beer in the fridge. Finger food a-go-go. Now, will anyone show? 6.20pm, ten minutes to 1st screening, the first guests arrive. Relief! A few more show up. My agent's there. Sam, too. Friendly faces. James, Jason, Lara. Big plus. A good few of the crew arrive, which is great. But I begin to stress out. My brain explodes with panic and I have no idea what I'm saying in the polite chit-chat preamble. I can't wait around any longer so I get everyone into the cinema for the screening. I make a spluttering speech, a thank you to everyone involved in the film. The lights go down. The film starts. The film ends. Time to hit the bar! 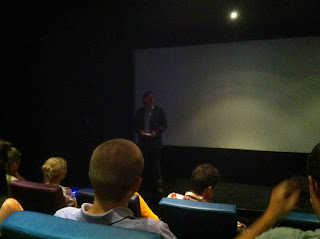 I haven't had a proper drink all night. I've been guzzling water since 6pm and still haven't had a pee yet. People are positive about the film but my brain is still buzzing with stress. More people arrive and we line up another screening. Some go in to see it again. I begin to calm down. The worst is over, and while some people have to scarper fairly quickly, a good portion decide to stay to enjoy the food and drink. PHEW! Ben Greenacre, vital line-producer, arrives epically late but we manage to show the film one more time, just for him. Sweet. I manage to have a pee.

There's a really good vibe in the room and everyone says nice things. It would be difficult for them not to, but still. It matters. Then it's time to tidy up. We've successfully wet the film's head and now it's time to go. Jo and I return to the hotel. I'm slightly dazed. I slug a glass of wine and collapse into bed but don't really sleep. It's hot. My mind replays the evening over and over. I can't tell if it went well.

The morning gives me fresh perspective. A warm glow replaces my stressful doubts. I begin to enjoy the event, even though it's been over for ten hours. We get the train home to Poole. I do some work as we chug along. Back to the office. Back to normal. Now it's time to get the film out there; film festivals, industry peeps, and so on. I've had great feedback already from impartial and independent folk, which is reassuring, so I hope the film can go and find an appreciative audience. Thanks again to everyone who was involved, you're my best friends forever. Now, time to risk divorce and make another short! Who's with me, eh? Eh? Eh?

I said it already Danny but hats off to you, what an achievement. It's hard enough for me to make an animated short - where basically my struggle is just with a wacom pad and my wallet - so to go ahead and make a live-action short to this refined standard is immense. Great stuff.

Congratulations! The film was fantastic and the screening was excellent. Many thanks to you and Jo for making me feel so welcome - it was a great night and I thoroughly enjoyed every minute!

Thank YOU Magz! For coming all that way and for supporting the project so much. I hope the trip was worthwhile. It was great to finally meet you.

Bloody well done, Danny. It's clearly been a massive effort to get to where you are now with ORIGIN, and I wish you every success on the festival circuit and in the industry generally.

Well done, fella. I know how much effort goes into a short (basically the same as a feature, minus the money and time). Hope it does well at festivals.

Thanks Laurence, cheers David! It's been a real adventure, that's for sure.

really pleased the screening went well! hope it has a long and successful festival run - and here's to the next one! x

Well Done, Danny! I love the film and really enjoyed the night. Great film, great hospitality and great guests. It was brilliant! All the best for the next.

Thanks, PD! And thanks for your directing tips, which were a brilliant help!

Great to meet you on the night Robert, thanks for coming!

I agree with the stresscitement and look forward and hope that some will come my way, and yours again, soon.

Am keen to make my way through your blog as it seems to have a load of good reading.

Thank you and may the shutters flicker.

The Frequent Scribbler.
(frequentscribbler.blogspot.com)
Building a habit to write.

I stayed in that Travelodge the week before.

It was tropical-misery hot, I'm barely suprised you couldn't sleep.

Congratulations on the successful screening!