Earlier this year, the inimitable Piers Beckley tagged me in a meme, asking 'what films do you watch again and again?' Well, I clean forgot about the meme until Piers gave me a polite poke recently (which I very much enjoyed, fnaarr). So, here's my mini-list of obvious choices combined with some guilty pleasures from the 80s era. I thang-ew. 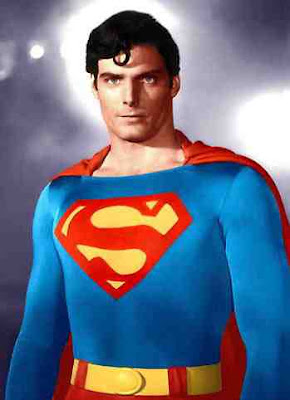 Superman (original). On its release, I was at the impressionable age to be suitably awed and inspired. It was a big thrill to work with Gareth Tandy on Origin, who worked on the original Superman as assistant director. Wowza!

Ferris Bueller's Day Off. I saw this in Cork as a way to kill time before I got the train home to Cobh. I then pestered EVERYONE to see it once it reached The Great Island.

Weird Science. "He don't even have a license, Lisa!" Sure, it's a bit childish but it's still quality Hughes, and I love it.

The Thing. Surprising, suspenseful masterpiece. "It's weird and pissed off, whatever it is." 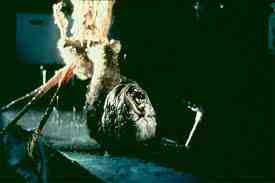 Don't Look Now. Saw it on late-night TV when I was a teenager and had no idea what it was about. Heavily traumatised afterwards.

The Godfather. Apart from its obvious brilliance, it was the first film to enlighten me on the value of character-driven narrative, and still continues to do so.

Trading Places. So much about this shouldn't work at all but it's just pitch perfect all the way.

Mannequin. Kim Cattrall as a mannequin who comes to life! Andrew McCarthy as the guy who gets his way with her! Hmm, I should probably stop this list now, yes? (but hey, there's a clever backstory of WHY she's a mannequin, so THERE!) 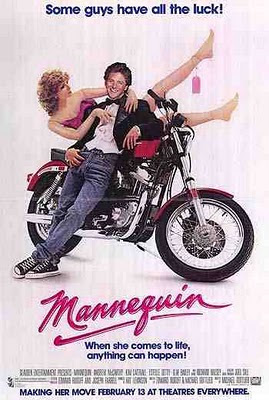 Somewhat off topic, but I've just seen Kim Cattrall in Antony and Cleopatra at the Liverpool Playhouse.. a complete revelation. She was great. Almost completely erased all that Sex And The City eybrow arching.

Kim Cattrall is a fine actress, Matt, and for the record, I'm a big fan of Sex & The City. I hate the way it's been touted that you have to be female to like it.

Nice picks, Sam, I'd have all of them on my list, 'cept I've only seen Spanish Prisoner once (with you, ha!) and it's been an age since I've seen Bad Day at Black Rock.

I'm with you on The Godfather. And with Sam on Tremors and Groundhog Day.

Plus Terminators 1 and 2, The Usual Suspects, all the Ealing Comedies (Lavender Hill Mob, Passport to Pimlico, The Man in the White Suit, Kind Hearts and Coronets), The Magnificent Seven, Aliens, Twelve Monkeys, all the Bonds, Highlander, all the Carry Ons, and a whole lot more.

And, now that I have kids, Snow White, The Jungle Book, Stuart Little 2, A Bug's Life, The Princess Bride and Finding Nemo.

Wicked list Danny. I'm partial to a bit of Kim Catrall myself, though I've never gotten very far with Sex and the City.

I did my list a while ago, but it does have The Thing and The Ladykillers on it.

Should have included Aliens though, I wore my first VHS copy out!

"Hey Vasquez, you ever been mistaken for a man?"

There is no ONE list, is there? I could've mentioned a million other films, but I went with a few personal faves/classics along with some dodgy guilty pleasures, stuff that stuck out for me when I was a teen.

I remember getting on my bike and pedalling my way down to Our Price to get my first copy of 'The Thing' on VHS, in 1998.

That screenplay is superlative, written by the late Bill Lancaster.

I was a committed believer of 'show them less', but the 'The Thing' makes me question that edict. It shows us a LOT, but it's disturbing and so it works. Has to be done surgically, lesser written creations creak when kept out of the shadows so it's just as fine an art to reveal your threat explicitly as it is to hide it.

Well, I think so.

My sister and I also wore out a cassette - Mannequin. We were 'ard kids.

I'm with the majority on the Thing; not one I watch lots of times but a stone cold classic.

I second Weird Science. Still love that film! Of course, Superman. The Godfather, definitely. Just got the restored trilogy on Blu-ray. What a treat! Trading Places, yeah!

I'm sure it's a crime I still haven't seen Ferris Bueller's Day Off and should be charged! :)

Of the top of my head, I would add Terminator 2, Home Alone, Cool Runnings and Back To The Future to the list.

B2tf was re-released at the cinema recently, it was incredibly restored and brilliant to see on the big screen. The only thing I didn't like were the other people who had paid to see it as well. It was like watching it with a laughter track! The blu-ray versions are incredible... had a little trilogy indulgence yesterday.