Part 2: How I Made A Web Series

Liquid Lunch is about two guys who regularly meet in the pub to break up the monotony of their working day but when they realise life is passing them by, they decide to do something about it. 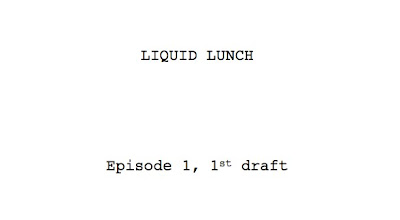 When I started writing it, I only had the first half of the premise. Two guys chatting in a pub. A bit of jokey banter, and that was it. Of course, that's when I was trying to do it as a 5 min short film but the problem with that approach was that it wasn't about anything. There wasn't any real story. But then, the exact nature of liquid lunches and excitable pub talk sprung into mind, and I had myself the second half of the premise. The story.

I was keen to keep things simple. Two guys. One location. Chat, banter and jokes, but to keep it focused on a story over 5 or 6 webisodes. I wrote webisodes 1 and 2, and thought they were OK. A decent start. But the key to comedy is collaborating. I started to think about my two lead actors, and perhaps utilising some improvisation into the scripts.

My mind immediately cast Dan Doolan in one of the roles. Dan's a screenwriting graduate from Bournemouth University. I had met him last year over a coffee to chat about writing and 'what to do next'. He mentioned that he and his mates had performed a comedy sketch show at the Edinburgh Festival, and I was well impressed. That takes balls. This snippet of info always stuck in my mind, and I was fairly confident he would be perfect for one of the roles. I Twitter'd him (I had lost his email, thank you the internet!) and gave him the lowdown. He was very keen to be involved and knew someone from his sketch group who would be suitable for the other role (Chris Billingham).

I met them on London's South Bank for a liquid lunch (hey, I'm METHOD), and to see if Dan & Chris were indeed a good fit. Luckily, they're really good mates, and they easily slotted in to the roles I had in mind. Dan naturally assuming he would play Ollie and Chris more suited to play Alex (left to right, below). Banzai! They flattered me with their enthusiasm, and I encouraged them to improvise and 'make the characters their own' as much as possible. They spent a whole weekend doing this, bouncing the material back and forth, eventually rounding up all their improvisation into excellent 2nd draft scripts of eps 1 & 2. I was on to a winner with these two (screenwriters & actors, a powerful combo!).

From their 2nd drafts, I did a 3rd draft, a neat mesh of all the best stuff we had done so far. If we all lived locally, we would have created a writers' room scenario but because we all lived in separate locations, we went with the procedure of me doing 1st draft, keeping an eye on character & story, the guys doing an improv 2nd draft, and then combining the best of the two. We got up to webisode 4 with this approach, and it was time to do some rehearsals to see what worked and what didn't.

Don't know what I'm blabbing on about? Never heard of Liquid Lunch? It's a new six-part comedy web series. Find us on every social network known to man! Well, Twitter, Facebook and the main website!

Thanks for this blog, it's really interesting to read about your process. Particularly as I'm about to embark on something similar (also for a web series) - though with the added complication that the actors will be improvising in Swedish! Which I don't really speak (learning. Slowly). So that should be interesting...

Best of luck with Liquid Lunch - am looking forward to it!

Thanks, Claire! Ooh, a Swedish web series, sounds great. Let us know when it's ready!