The second London Screenwriters Festival got underway with a lot of style today. Here's what I did:

10:30am I'm hosting the first session of the day, after the keynote speech. The first session! And it's in the main hall! No pressure, then. Hey, pressure's for tyres. OK, so I'm a bit nervous.

I've never actually moderated a panel before and the line-up's pretty impressive: Martin Gooch, Vadim Jean, Berni Corbett and Chris Hill. We're there to deliver 50 tips about breaking into the business. It's officially 'Another 50 tips', as they had a similar session last year, but they only got through around 7 tips and had a general chat.

I'm determined to get through 50 tips, so, with the help of my fellow panellists, I've compiled a list beforehand so that the audience get bang for their buck (list available as handout via the festival). Tim bets me a tenner that we won't get through all 50 tips. We get through around 40, which is pretty good going, but the chat doesn't feel like a dull list checkpoint. I think it went OK. I officially brand it THE BEST SESSION OF THE FESTIVAL, mainly because it's the first session, and there's no other session to compare it to yet, but hey, whatevs.

We have a scriptchat afterward with a few eager scribes who have questions, and then it's lunch already. I bulk up on the salad bar. It's this kind of detail that keeps you glued to the blog, I know. 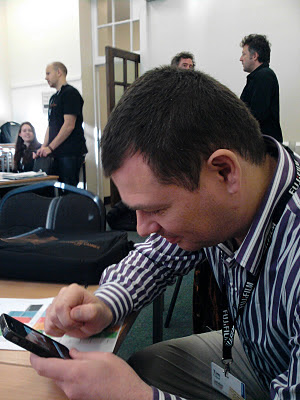 After lunch, it's straight to the cinema for a Q&A with Edgar Wright, a last minute addition to the schedule. Edgar is easygoing, charming and candid, and gives good detail about how his career started, how it developed and how he's got to Hollywood. 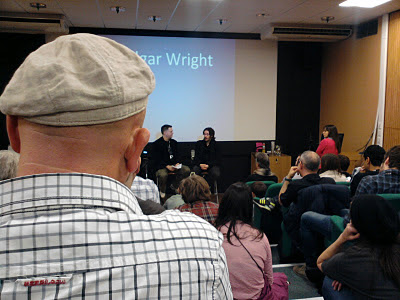 The next Q&A, in the main hall, is with Joe Cornish, the perfect sequel to Edgar's Spaced-out chat. Joe is equally easygoing, charming and candid, and gives good detail about how he wrote Attack the Block, and what it was like writing for Spielberg (for TinTin, which he wrote with Edgar). The key theme that I take away from both their talks, however, is the VALUE OF RESEARCH, and how it can inform everything, even the most mundane or trivial research topics. 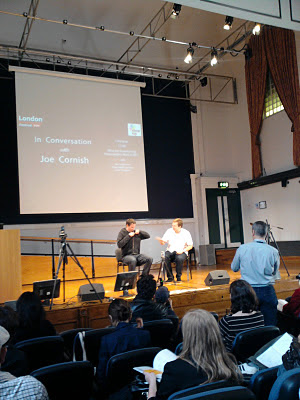 There are half hour gaps in between each session, which gives everyone plenty of time to network, get caffeinated or take time-out, or all three.

Tim's hosting a talk about writing for games, so I head along to that with Chris Hill, and we enjoy the wit and wisdom of Tim's vastly experienced panel. 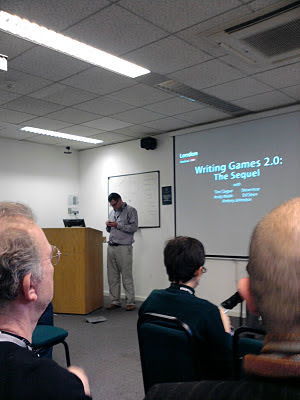 (Tim finally figures out what hashtags are for on Twitter)

Time for the bar! After a couple of sherberts, I duck out for a kebab on Maryleborne High Street - delicious! - but even though I'm only gone for a half an hour, the bar crowd has significantly thinned-out on my return. Me, Chris Hill, Alli Parker and Andy Conway stick around till closing, and are the last to leave the bar. We're, like, so not tired, so we grab a nightcap on Maryleborne High Street (although we lose Alli along the way). I pitch Chris and Andy the delights of my earlier kebab and now they want a piece of the action but when we follow the trail, the kebab shop's just closing up. Denied!

There you have it. A terrific day of screenwriting buzz, and in great company with new and familiar faces. Roll on day two!
by Danny Stack at 12:50 am