It's a supernatural thriller about a woman who tries to keep her family together when her son falls ill after he's bitten by a mysterious creature. Starring Lee Ross (Dr Who, EastEnders), Katy Carmichael (Waterloo Road, Spaced) and Jack Blumenau (The Railway Children).

For more details, photos and behind the scenes, check out the official website.

If you're new to the blog, Origin is based on one of my feature film scripts. I think the script is very special so I made the short to show the industry what the film could be like rather than just rely on the script alone (plus, I wanted to have a full and proper go at directing).

I started pre-production in January 2009, filmed over four days in April 2009, and finally finished the film in post-production in July 2010. Despite some stressful periods (mainly due to finance, and me not knowing what I was doing), I had the time of my life. Cast & crew were incredible. 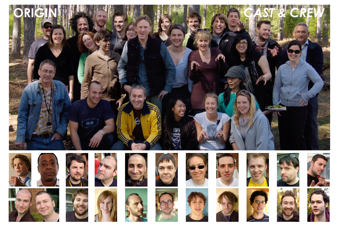 The film has screened at Raindance Film Festival, Brancharge Film Festival, London Short Film Festival, Berlin British Shorts, Shortcutz London, Purbeck Film Festival, and won BEST HORROR SHORT at London Independent Film Festival in 2012. I'm hoping the film can now reach a broad and international audience now that it's online. If you like the film, please feel free to share and post on your social networks.

Key blog posts from the archive:

I'm going to LIVE TWEET the film on Twitter on Wednesday 23rd January from 1pm, so if you fancy watching and tweeting along with me, please join me!